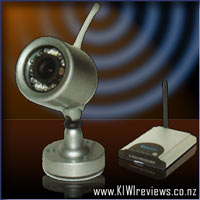 Disclosure StatementFULL DISCLOSURE: A number of units of this product have, at some time, been supplied to KIWIreviews by Swann or their agents for the purposes of unbiased, independent reviews. No fee was accepted by KIWIreviews or the reviewers themselves - these are genuine, unpaid consumer reviews.
Available:
at selected Harvey Norman and Dick Smith stores

Place the camera anywhere within reception range:
•  In the letterbox or garage
•  the eaves around the house
•  Monitor the pool, yard, entrances and driveway

Definately a great investment and one well worth the price!! After seeing what the Nighthawk can do I have been searching out the product at local stores. If you are looking for a security system for your home, office, and or store dont overlook the NightHawk. It is simple to operate and installation is point and go!!!

Many a time have I been tucked up in a nice warm bed, and hear the knock on the door... "Who could it be at this hour?" I've had couriers, drunks, neighbours, police, fire dept, strangers, friends, family and even animals... so often has been the time I wished for an easy way to classify and respond to such events. An intercom solves only the conversation aspect, a camera was the missing piece.

In flies the Nighthawk to save the day. A fully self-contained colour LCD camera with nightvision thrown in. Arriving in a simple and convenient shaped-plastic hangpack, this little parcel contains everything you need, and some extras too. The camera, of course, complete with mounting screws, softwall plugs (for secure mounting in soft-material walling such as plasterboard etc), receiver box, a 2-to2 set of RCA leads, a PSU each for the receiver AND the camera, a power plug adaptor for the camera that allows it to run off a 9v battery, and -SHOCK- you'll find that a 9v battery IS included.

Basic setup couldn't be simpler. Mount the camera with 3 screws, find either a route for the power lead, or a home for the battery (I drilled a small hole in a plastic 8mm VHS tapecase painted black, drilled 2 screwholes in the base, screwed it to the wall in a sheltered spot nearby, and clipped in the battery. Mostly-weatherproof and easy to access, but doesn't look easy to open to the casual observer), and that's the hard bit done. Then attach PSU to receiver, attach the AV leads to the inputs of your chosen device, be it TV or Recorder of some kind.

Power them up and you're away, under 10 minutes. Now this is where things went a little banana-shaped... due to some interference from my cordless phone nearby, I decided to cycle through the 4 available frequencies, to find a 'clear line'... time to unscrew the front of the camera to access the dip switches that set its transmission freq. A firm grip on the base, another on the front of the housing, and -heave-... it twisted about 5 degrees and jammed to a halt. A small part of the rubber o-ring seal had gotten entangled in the thread, grinding it to a dead stop.

After much huffing, puffing, grunting and twisting, the (un)subtle application of a craft knife and a tiny screwdriver blade acting as a chisel... I finally got the casing open, and the o-ring was now in about 18 pieces. Quality Control suggestion: throw in a couple of spare o-rings to cater to the accident-prone amongst us. After that, the task of switching channels was easy and solved the problem in 3 clicks. I now had a clear view, day or night, of my front gate, front door, and all the space in between. The total distances from camera to door and gate were well within the 10m area lit by the onboard IR LEDs, so it was all well defined no matter what the lighting conditions.

OK, so it passed the main test hands-down, full marks. Now on to the other comments... The ability to unscrew and move the mounting bracket for ceiling-mount is great, however, with a bit more design planning, it wouldn't have taken much to reposition the holes so that the bracket could be switched to a side-mount position too. So at present, if you want to mount it on a side-wall of a corridor and have it look sidways along the hallway, you'll have to forget it and mount it on the ceiling instead. Like the o-ring, it's a little thing, true... but don't the little things matter too?

The supplied 9v battery will run the cam for a decent time, unless you mount it in low-light conditions, then expect to be changing it out within 6 hours. However, slap in a high-range high-drain-tolerant battery (Think silver casings) then you'll get some decent time. However, if you can, try to locate a suitable pathway and use the supplied Mains-Power Adaptor.

Overall, this was a stunning little camera. I was impressed with it's construction, niggles allowing, and the ability to refocus it if you unscrew and remove the IR-LED array board (a feature not covered in the instruction manual). Its indoor/outdoor capability makes it totally versatile and flexible in purpose, and you literally have everything you need (bar recording/display equipment) in the pack. Buy extra add-on cameras for enhanced coverage. Throw in the PC card or a good quad processor for total security.

idMicroDots are the latest technology in asset protection through the identification of your property.

Microdots are currently being applied throughout the world to covertly mark and identify home & office contents, cars, motorcycles, trucks, boats and marine parts, in fact any item can be marked and protected - no matter how large or small - whether it has monetary or sentimental value - it is your ... more...