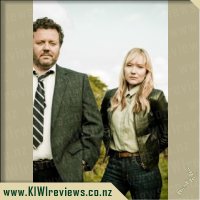 Disclosure StatementFULL DISCLOSURE: A number of units of this product have, at some time, been supplied to KIWIreviews by Roadshow (NZ) Ltd or their agents for the purposes of unbiased, independent reviews. No fee was accepted by KIWIreviews or the reviewers themselves - these are genuine, unpaid consumer reviews.
Available:
November 2014

The Brokenwood Mysteries don't involve blood and gore. The deaths are generally off-screen or understated. Any forensic style police-work is usually off-screen or happening in the background but it's Mike's unorthodox methods that are upfront. Every death has an impact on him - if not emotionally - then thematically. As Mike pursues his dogged investigations, it's like peeling the layers off an onion: clues are revealed, character's aspects are opened up and Brokenwood's secrets uncovered.

I saw this advertised on Television and thought that this would be a good show to watch as I enjoy a good crime drama. When it was available for review I applied and was happy to see it in with some other things from KIWIreviews.

I put the first disk into the player and saw that there were two episodes on the disk but not impressed to see that there was no option to play all but once I had selected the first episode it was good to see an episode summary and the option to play or to play with subtitles for the hearing impaired.

I enjoyed the series but thought that sometimes the actors looked like they weren't too sure of what they were supposed to be doing instead of looking natural. At first I thought that two hour episodes were a bit too long but after watching I realised that it was not long or boring and a lot of things happened in each episode.

I really enjoyed the series and hope that further series are made as it is always good to support local talent. I have just seen on the brokenwood mysteries website that there is going to be a season 2 so I'm definitely going to be watching out for that one as I enjoyed season one. I mostly liked that each episode was stand alone so if I missed one then you don't get lost in the whole story and that there wasn't a lot of violence and that a lot of the gory stuff wasn't shown.

A criminal mystery series and throw in that it was New Zealand made and I knew that I needed to give it a try, and give it a try I did.

When I first started watching this I have to admit that I did find it rather hard to and almost gave up on the show. I didn't realize that the episodes were two hours long and so it did feel like it dragged on rather a bit and I did feel a bit restless waiting for things to get a move on for as with any new show you do tend to spend a bit of necessary time getting to know your new characters first.

The acting... Well... The very first episode seemed so cheesy that it was all we could do but giggle at some moments, roll our eyes or groan at it but by the time we got to the end of the season we had adapted well to the acting and so it was easier to enjoy the movie and just go with the flow. It did seem a bit stilted at first and felt like they didn't know exactly what they were doing but they got better and I rather did enjoy the mysteries and the guess work of figuring out who was the killer. I also love that they had a character that looks like a rough and tumble kind of guy yet is an expert in some of the finer things, like wine...

All in all this ended up being an enjoyable TV series and I am rather looking forward to a second season.