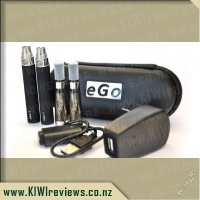 Disclosure StatementFULL DISCLOSURE: A number of units of this product have, at some time, been supplied to KIWIreviews by NZ Vapor or their agents for the purposes of unbiased, independent reviews. No fee was accepted by KIWIreviews or the reviewers themselves - these are genuine, unpaid consumer reviews.
Available:
via Online Store

Our eGo-T Starter Kits are a good solution for those who are new to vaping.

I have been vaping for well over a year now and a non smoker for the last 6 months of that year thanks to the eGo starter kit. As an introduction to the world of vaping or simply to try and curb your intake of ciggies, the eGo is definitely worth a try. The starter kit contains 2 complete units and a usb charger which can be used at the wall socket or on your laptop usb port.

I used the eGo to quit smoking and for the most part it worked really well, although for the heavier smoker trying to quit, it may not pack enough punch to satisfy you completely without the combination of will power as well.

There is a multitude of various flavors available for these now including some very accurate tobacco flavors as well as fruits, cakes, lollies and more, there will definitely be a flavor for everyone. For myself with $100 + a week smoke habit giving this a go was a no brainer. At $65 for a full kit its about the same cost as a 30g of tobacco but will last a lot longer.

The eGo is now common place in a lot of convenience stores and replacement tanks are easy to fit and everything is kept together in the carry case which is not much bigger than a wallet. Having 2 units in the starter kit was a smart move as any smoker knows you never want to run out so while one is on the charger you can still keep those pesky cravings at bay.

If you are like me and limited will power or simply just enjoy smoking to much to give up then I'd say give this a go but if you find like I did that it didn't pack a big enough punch don't be disheartened there are a lot of other options available that have a bit more grunt.

I have been a smoker for far too long now and would so love to give up completely but have had no success with efforts to break the habit. I had never tried an ecigarette in the past so was keen to get on board with reviewing one through KIWIreviews. My hopes where that I could cut down the amount I smoke by getting a nicotine hit in a different way. Well I have had some success in my efforts and I am certain I can have continued success in using this kit.

I received this kit and a NZ vapor Red Bull flavoured eJuice. I read the instructions of how to use the two products and soon had my ecigarette loaded and ready to go. The instructions were very straightforward so I had no trouble in following them and assembling the cigarette took a matter of seconds. You can also dismantle the cigarette again to store it in it's case for easy transportation when you are going out which is great as it really is a 2 go kit.

The first thing I noticed when I started inhaling was that you get a little head rush I wasn't expecting this being it is not a normal cigarette but it must have enough nicotine to give you a little hit. It is super easy to use you just push the button on the top side of the ecig while you are inhaling. You get a little bit of vapor which you can blow out so it looks and feels like you are actually smoking a cigarette but without the harmful stuff.

When I start to feel like a cigarette I get this out and have a few inhales every now and then until I really want to go and have a cigarette. I have been able to delay having a smoke for a couple of hours at a time by using this instead so I would of at least halved my cigarette intake in the week I have had this kit. I am certain I can continue to cut this down as this kit makes it easy to give you a little hit when you need it.

The one and only thing I regret about doing time in the military is that I got hooked on tobacco. Filthy stuff that has played hob with my health for decades. I have heard stories about these fancy electronic gizmos and one of my friends at the local bridge club bought one and brought it in one night. "Best thing ever, mate!" he told me. So, when I saw this was on the line for testing, I thought it could be worth a try.

Using some good quality 'juice' (the flavoured liquid that carries the nicotine) supplied to me by my mate, I gave the puffer a good testing. Now, I'm not a rich man, and the recent tax hikes make giving up a very appealing option to consider, because at the current prices I would be spending $50-$60 a week on rubbish that goes up in smoke. Having given this a trial for a week, I gave the last of my cigarettes to one of my tamariki, along with a note to the website for this gear, and told him he could either continue to smoke that rubbish or invest 2 weeks of ciggie money in something that is better for him, smells more acceptable, and will stop his kids coughing all night from the leftover smoke and tar in the air. It's been a further week since that day and I have used about half the liquid my mate gave me, haven't touched a cancer stick since, and not missing them at all.

I have also noticed I can even breathe better now, and my doctor tells me it was the best thing I could have done, short of giving up cold-turkey. As a sign of how well I have improved in just a fortnight, my regular 3-weekly appointments have been switched to 5-weekly, and he said that if I stick with this, he'll move me to the 8-weekly list after 2 or 3 more visits. Gotta say though, individual results will vary. I'm a tough old Koro who has stubbornly refused to die a few times now. I never seem to be home when Hine-nui-te-po sends her invitation to visit.

The kit is simple to use as long as you read the instructions twice before you start. Rechargeable batteries that can be juiced up through that USB plug on the laptop or a wall charger means you won't have to worry about buying batteries in big boxloads either. The only tough bit is getting the nicotine liquid. My mate tells me it can be tough to get in Aotearoa because of some stupid law or another, so he orders it in from some place on the internets that a friend of his in the States runs. He's going to get some in for me too, but he says it's better to buy the flavour juice stuff locally to save on shipping. I can see that the company who sells this hardware can sell the plain juice too, so I will be looking at buying from them.

Talking with my mate, and going by some of the information provided by KIWIreviews along with the kit, I have worked out I can cut back on my nicotine intake, pretty much remove all the tar and toxin intake, and save myself nearly $200 a month. For an old pensioner like me, that is something to take seriously. I might have enough money to get some work done on my whare in 2-3 months now, instead of nearly a year away. Pretty stupid not to switch and stay switched, eh. Thanks KIWIreviews!

The Original Massage Pillow is endorsed by Suzanne Paul and can be used anytime.

It is ideal for use at home, at the office or in the car during long journeys.

It is easy to use just place the Massage Pillow in the area you want to gently massage such as between your shoulders, behind your back or your hips, knees, elbows or ... more...