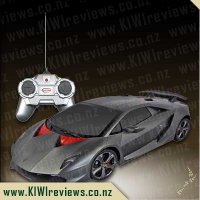 Now receiving this item to review was a pleasant surprise after having a play with one at the Digital Nationz Expo. Small in size, but very detailed, and incredibly zippy.

Unlike many remote control cars, this one does not contain internal rechargeable batteries. Instead, it requires 5 x AA batteries (3 in the car, and 2 in the controller). This is both a positive and negative thing. On the positive side, you can instantly put in or take out batteries, to play immediately or to conserve charge. the negative is that batteries can be rather expensive, and even if you use rechargeable batteries, you need 5 at a time, which would be difficult to sort out without multiple battery chargers.

So when I had a play, I purchased some Energizer Max batteries and gave it a whirl. Driving straight forward, it took a speedy walk/light jog to keep up with it, and the car had a turning radius of approximately one metre, so it does require some room. I had a great piece of driveway outside with a little rise at the end, which provided a great ramp. With the batteries I purchased, I managed to get a solid hour of drive time before it started to slow down and lost manoeuvrability. Despite the specifications mentioning a top range of 10-15 metres, I managed to drive the car for 20+ metres before losing signal.

The remote controls are simple, with only four buttons - left/right and forward/backward - so this makes it a very easy car to control. Being a 1:24 scale model, it is a very low vehicle, so you need to ensure that the floor is clear of obstacles; it will get stuck on pieces of gravel, and while it can go up small ramps, it is not able to climb over much. Even so, I am thoroughly enjoying this car, and am planning to draw a track in chalk on the weekend, and do some Top Gear-style laps in my reasonably priced remote control car.

On the Sentai Mountain there was a peaceful civilization, where advanced robots and the ancient way of life went hand in hand... then it all changed...

Now the humans and robots fight for survival... and victory...