Attack of the Shadow Smashers review 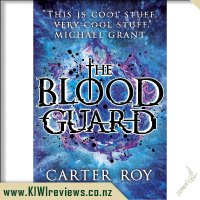 When thirteen-year-old Ronan Truelove's seemingly ordinary mom snatches him from school, then sets off on a high speed car chase, Ronan is shocked. His quiet, nerdy dad has been kidnapped? And the kidnappers are after him, too? His mom, he quickly learns, is anything but ordinary. In fact, she's a member of an ancient order of knights, the Blood Guard, a sword-wielding secret society sworn to protect the Pure - thirty-six noble souls whose safety is crucial if the world as we know it is to survive.

Now all those after-school activities - gymnastics, judo, survival training - she made him take, make sense. For suddenly Ronan is swept up in a sometimes funny, sometimes scary, but always thrilling adventure - dashing from one danger to the next, using his wits to escape the Bend Sinister, a posse of evil doers with strange powers. Falling in with two unlikely companions, Greta, a scrappy, strong-willed girl he's never much liked and Jack, a devil-may-care teenage pickpocket, Ronan is left with only his wits and his mom's last words of advice: Trust no one. That's a lot for an ordinary kid to deal with. But then again, maybe Ronan's not ordinary at all.

I always enjoy reading anything with a good story line and the blurb on the back of this book sounded like it could be really interesting and a good start to a series. I'm glad I requested to review it as I loved it, had to deal with a migraine while reading and only stopped to rest due to how much my head hurt but I got back to it as soon as possible.

Imagine being told that your mum is part of a secret society and that they are fighting the bad guys. The last advise given to Ronan is to trust no one, he had to use some of the lessons gained from all the after school activities his mum enrolled him in (dancing, gymnastics and others that sounded like it could have been a lot of fun) and he suddenly realises that nothing in his life is as innocent as he assumed.

The ending was a bit unexpected, there was a huge twist but it also helped explain a lot. I like that the characters aren't perfect and that the good guys don't always know what is going on and the bad guys are true to form.

I think this might be part of a series (haven't googled it ... yet) and if it is then I'm eagerly awaiting the next book.

With a funky colour and an interesting premise, this was a book that I really wanted to read.

Evelyn Ronan Truelove (though he prefers to be called Ronan), is an ordinary boy, or so he thinks. One day his mum suddenly turns up at his school and declares that she is sending him off on the train and that he can trust no one. Suddenly he thrust into a world of Blood Guards and Bend Sinister's and goes on the run for his life. The background to this I found very interesting, it's set in our world with events that we know about, they added God into the mix, but it was such a brief mention that I was fine with that. The idea that there are 36 Pure in the world and their deaths bring darkness to the world was really interesting, such as a couple of deaths caused the events of WW2 and nearly all the Pure dead caused the events surrounding Noah and his ark.

I liked that Ronan and Greta don't get along at the start, but there's no huge amounts of bickering and they don't suddenly fall into each others arms, so their characters are really well written. Dawkins is fun and I'm glad we got a short, but to the point, history of how he came to where he is today. This is a fast paced book but there are some good breaks in between providing a laugh or two along the way. I didn't clue in to the twist till closer to the end of the book, which is good, and the bad guys are really well written, I wouldn't want to meet them, that's for sure.

I really enjoyed this and I'm looking forward to the next in the series.

Thirteen-year-old Zeyneb is an ordinary girl juggling friends, boys and family. But, as a good Muslim girl attracted to a non-Muslim boy she has more difficult choices. Can
she be true to both cultures? And now that she's a woman in the eyes of her religion,
what does it say if she wears the headscarf that's a part of who she is?