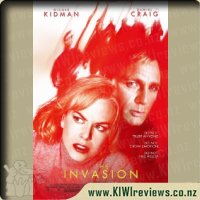 Aliens take over the planet, nothing new, but here we go again with a version that isn't too bad.

So the movie starts off right away with Carol Bennell (Nicole Kidman) scattering around the medicine cabinet in a Pharmacy whispering "stay awake, don't fall asleep" to herself. The neat fast-paced camera work kept you right into the movie from the beginning, but sadly the great beginning just doesn't match up to the awful, rushed ending. It seemed like they got tired of writing the movie so they decided to end it off with a simply and quick ending.

The plot is something that has been done before, it's nothing new and has been remade several times, this version, The Invasion, doesn't do too bad a job but the ending really sucks. Kidman and Craig do well in the main roles and the young boy does a great job in hie role. There is enough going on to keep you watching but then the ending feels like such a let down that you you're not in a rush to watch it again. There isn't a huge amount in the way of special effects, but I do remember the car crash scene being in the tabloids.

Overall, not a bad film but suffers for its ending/.