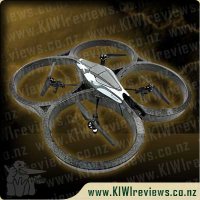 Disclosure StatementFULL DISCLOSURE: A number of units of this product have, at some time, been supplied to KIWIreviews by GadgitShop or their agents for the purposes of unbiased, independent reviews. No fee was accepted by KIWIreviews or the reviewers themselves - these are genuine, unpaid consumer reviews.
Available:
via Online Store

The AR.Drone 2.0 is a remote-control quadricopter, which combines the best of the modeling, video gaming and augmented reality. By downloading the free app for your iPhone or iPad, you can control your AR.Drone 2.0 seamlessly.

Features include:
•  Record and share High Definition videos - you can stream live High Definition video and share with your friends
•  Explore more - with the Wi-Fi N connection, you can fly your AR.Drone 2.0 from as far away as 165 feet
•  Acrobatic moves - become the daring pilot and perform barrel rolls by simply pressing a button
•  Interchangeable hulls - these hulls allow you to use the AR.Drone 2.0 indoors and outdoors, with the full sheild protecting your quadricopter from impacts within the house. The indoor hull is robust and safe, while the outdoor hull gives you more control
•  Augmented reality games - using apps from iTunes, you can play a wide variety of augmented reality games, including single and multi-player games

AR.FreeFlight
AR.FreeFlight is the free control application for the AR.Drone 2.0 quadricopter. Available on the iTunes App Store and Google Play, you're ready to fly in an instant! By tilting your smartphone or tablet, you controld the direction the AR.Drone and by releasing it, it's instantly stabilised.

What's in the box?
Included with your AR.Drone 2 is the indoor hull structure (for navigating those tricky hallways), the outdoor aerodynamic hull (to see how high your quadricopter will go) plus a battery and charger with US, UK, European and New Zealand plugs.

When the first AR.Drone came out, it was a geek-toy reserved for the most elite of the 'l33t - those with iPads. iOS-only, it was out of reach for those who either didn't want, or couldn't afford, a tablet. With it's second release, Parrot played it smart... and played to the smartphone market. The app is now available for Android, and the hardware needed to drive it has been squeezed down into devices as small as your phone. In fact, to test this theory, I downloaded the app onto my Samsung Galaxy S - which has had Android 4.1.1 OS ROM force-installed on it. Sure enough, I was able to pull the drone out of the box, charge the battery for half an hour - just enough to give it a 30 second test run - plug a USB pendrive and the battery in, and get the drone to lift off in the middle of my office.

After that, and fully-charging the battery, it was time to trial indoor flights - around the dining room, down the hallway, recharge the battery, send it into the #FoodLab, then chase the kids, and finally get close-ups of some very curious rats all clustered at the cage doors wondering what this noisy new creature was. Another recharge (overnight, as it was WAY past bedtime by this time) then it was outside for some test flights to see what the performance differences were between using the indoor and outdoor hulls. Frankly, even outdoors I prefer the indoor hull - the added protection for the rotors is a good thing in my book, and the difference in flight profiles is minimal - a slightly longer battery life and a little more range of movement... nothing that I wouldn't happily sacrifice to keep the rotors from clipping a tree branch should a stray gust of wind shove it the wrong way during a close flight.

I was also lucky enough to get permission to give this a test flight in the Claudelands Arena main auditorium. This is a large indoor venue with tiered seating that can be collapsed and packed away to open up an epic floorspace - it's been the venue of choice for such expos as Armageddon Expo and The International Tattoo Expo in Hamilton over the last few years. On the plus side, I had a chance to really see what this beastie could do with space and no wind, but the downside was that the lighting was quite poor and the video we got was of a standard I found a little underwhelming. However, to be fair, I do think the footage was pretty good considering it was shot in an environment almost ANY camera would find challenging without a flash or additional spotlighting. The venue did offer to turn on the floodlights, but pointed out that they are aimed straight down, which would not have cast much in the way of ambient light suitable for the footage we were trying to shoot.

So, what are the pitfalls to be aware of? There are a few, but nothing that would be considered a deal-breaker.
1 - You should be VERY certain to go through all of the settings and preferences, try all of the interface buttons, and maybe try "easy mode" and "free control mode" before you really try to give this a real run. Things like setting maximum altitude, tilt and transit speeds can make the difference between 'fun flight time' and 'climbing trees'.
2 - You should be sure to set "level trim" before you lift off, to avoid strange side-slide behaviour.
3 - Invest in the "High Capacity" battery - in fact, buy at least two. The standard battery will give you no more than 10 minutes flight time. In fact, as the battery starts to fall below 40%, the unit will behave erratically, doing strange little mid-air bunny-hops and sudden drops from height followed by high-rev surge leaps. This is a sure sign it's time to bring the baby home and hit the green 'Landing' button.
4 - The 'HOME' button won't work unless you have the optional "GPS Flight Recorder" unit. I can't say how effective it is - because we don't have one - but the specs indicate it could be a good accessory of choice.
5 - Don't let this unit get too close to an overhang or ceiling - it will create a low-pressure suction zone above it, causing the unit to effective stick itself to the roof. The only way for it to break free is to stop the rotors, fall a bit, then restart them to avoid crashing... and despite it trying to do this, it will inevitably just stick itself up there again right away unless you are quick on the controls and tilt it away from dead-vertical. Practice this... because if it happens while you are flying 'by wire' (ie. Not in the same location as the drone) then you'll be hard-pressed to get it back before the battery runs flat.
6 - Keep in mind that the control connection is limited to the range of your controller device. You take control of the drone by connecting your device to the drone's internal WiFi Hotspot. Though the drone has a range of up to 165 feet (about 50m) your device may not have quite that range, and the drone can easily fly out of your range in only a few seconds. Do NOT believe the videos that show someone sitting on a building flying the drone around people hundreds of metres away.

So, given that list of "things that could make this suck", why is it scoring so well? Easy... because of all those things, most of them are not actual faults... they are things the operator has to keep in mind to get the best from this 4-winged beastie. With the exception of the basic battery being less than ideal in terms of durability - for heaven's sake, add $70 to the price tag and pack high-cap batteries by default at the factory, it's not that hard to work out, Parrot! - this is an amazing toy. Yes... it's a TOY... accept the fact, and enjoy playing with it!

Overall, this is something that will get a lot of potential usage, even if it's really only suitable at large indoor venues with seriously good lighting, or on dead-air days outdoors. Though it can handle a bit of wind, the amount of work it has to do to compensate means your battery will run out of ergs well ahead of schedule. Spare batteries ARE a 'must' if you want more than 5 minutes effective flight time. If you have the budget for this, throw an extra $200 on the bill and get a couple of high-cap batteries at time of purchase - you will be glad you did!

Sick of storing your Flexo inside the vacuum cleaner bag? This is the perfect solution, complete with dividers for keeping everything where it should be.

Suitable for the Builder and Inventor sets.