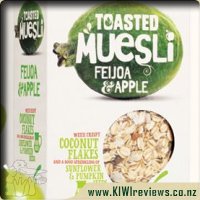 It's not everyday you discover you've achieved a world first. So we were pretty pleased when we found out we were the first in line to pop the humble Feijoa into a Muesli. OK, that feat probably doesn't rank as highly as climbing Everest or splitting an atom, but still, we had a 'Woo-hoo' moment amongst ourselves. So go on, enjoy a little bowl of this Kiwi amazingness and feel the glow.

When you look at the packaging for a product, it normally gives you a hint as to what to expect. However, in this case, the relatively plain exterior hides something deliciously different inside. Putting feijoa into a cereal- what a crazy idea! However, it is really yummy, and so uniquely Kiwi, I had to give it a try.

Hubbards Feijoa and Apple Toasted Muesli is actually quite close to something you would make for yourself at home. no nasty, musty, dust-like cereal in this bag. It is full of large pieces of dried apple, feijoa, seeds and oats. Not too toasted, so it's not really crunchy, but also without the soft, chewy 'raw oat' texture that I really don't like. The flavour is absolutely delicious. The feijoa really comes through, but doesn't overpower (as it can do so easily). The seeds are a really lovely crunchy addition. I also love the fact that it doesn't contain nuts (like so many other muesli's do) as I am allergic!

I was also pretty impressed with how much you get in each bag. Whilst it doesn't look like much, a little goes a very long way as it is really filling. We find that a single box will last two adults at least five or six days. The only negative for me is the amount of sugar it contains. Compared to many off-the-shelf muesli's it isn't too bad, but still quite sweet compared to home-made. I understand that Hubbards have now produced a 'no added sugar' collection in this range, so I may have to try those too to see what they are like.

Overall this cereal is delicious, has a nice variety of ingredients, and has a crunch without breaking your teeth. Whilst it is a little sweet, it doesn't contain nuts and you get good value for money as it is very filling. Overall a really great way to start your day for a feijoa fiend,

I saw that Hubbards had a new range of Muesli in the supermarket on the weekend, or at least new to me. They had so many yummy flavours to choose from, but since I'm on a bit of a feijoa kick at the moment I selected this one. Feijoa can be quite a polarising flavour for many. Its one of those tastes that you either really love or hate. My husband loves feijoa and I have grown to enjoy it too.

The box for this product is unusual. Its more square at the base than rectangle. This makes it almost tower shaped. It fitted okay on my shelf but took up room that would have fitted two cereal boxes in otherwise. Still I could see where they were going with it. The comments on the box were fun to read, especially the instructions on shaking the contents before cutting it open to avoid the nightmare of cutting it open and shaking the contents about. My daughter and I had a little giggle over that.

I filled my bowl with this muesli. It was good to see big strips of dried apple, pumpkin seeds (yum and so good for you!), coconut, rolled oats and flakes too. On the first bite, I could taste feijoa but it was subtle. On the second and third spoonful, I couldn't really taste the feijoa at all. I guess they went with a lesser flavour to appeal to the masses, but if you don't like feijoa then you wouldn't buy a flavour called feijoa and Apple.

Overall, this is a nice muesli and definitely has that luxury factor, but I do wish they had been braver and amped up the feijoa a bit more. I recently made some Anzac style cookies, adding the muesli in place of the rolled oats. The dough was fairly sloppy, but the cookies came out really nice and had that subtle feijoa flavour too.