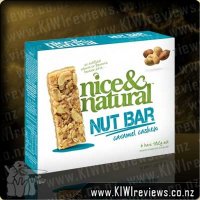 I have been a fan of Nice and Natural bars for some time but often get the same one. One day I decided to try something a little different! Instead of grabbing my usual trail mix bar I grabbed the caramel cashew nut bar. What a good move that was! The bar was absolutely delicious. The mix of nuts with caramel is amazing. I love the crunch in these bars - the crunch you get when eating actual nuts! The caramel is just the right mix of sweet with the savoury nuts and is amazing!

I would recommend these bars to anyone. It can be hard to find snacks that are yummy and healthy and you know are good for you! Nuts have always been a fan, but it is easy to get bored with eating plain nuts all the time! These bars are great for any time of the day too - great for a morning tea snack, after a sandwich or other at lunch time, an afternoon tea snack - they are even sweet enough to satisfy the sweet tooth after dinner! You certainly can't go wrong with these bars - I will be continuing to include them in my fortnightly shopping trip and always have a box in the cupboard!

As a mother of three I am often faced with the decision of what to put into my children's lunch box. Unfortunately for many of us it is not always easy providing jam packed extremely healthy lunch boxes. And it is even harder finding muesli style bars that all three of my children will like. It is always guaranteed that there will always be that one child who does not like the bars. It is very stressful at the best of times.

I grabbed a box of these one day while in the midst of studying for exams. I would often get hungry whilst studying late at night, so thought these would be a handy bar to have on hand for those moments. Well turns out this was a great move. All three of my children love these. Much to my absolute amazement. I have super fussy kids at the best of times, so it was very much a surprise.

When it comes to bars I also do not like spending over the 3 dollar mark, finding some of the asking prices to be ridiculous, but in this case I do not mind because like I said, ALL my kids like them, as do I. Highly recommended.

I absolutely love this muesli bars. Muesli bars aren't something I buy often unless it is for the kids but I have bought me and my partner a box of these from time to time as a treat. The box only lasts a couple of days as they are so yummy and so easy to eat as an afternoon or late night snack.

I love cashews and I love caramel so I knew these would be a good combination. This is a pretty sweet muesli bar with the caramel and the almost chocolatey coating on the back of the bar but you get that definite taste of salt from the cashews which makes them so tastey and different. The bar is really chewy too so you get a good jaw workout and they are really filling, so a great afternoon pick me up.

I have tried other bars in the nice and natural range but this is by far my favourite so when they are on special I will often pick up a packet as they are quite often on special and you can get them at a really good price!

I only bought these bars because I saw them on KIWIreviews, and it was a bonus that when I went to the supermarket they were on special because I know for sure that I wouldn't pay the normal retail price for what the nut bars actually were. The small print on the front of the box stated the product isn't shown actual size...I thought great because they better be bigger than shown. I was very disappointed..I took out the first bar and it was exactly the same size as the picture (I was sad enough to measure it)....maybe I am just greedy!!

I did like the taste of the Caramel Cashew Nut Bar, it was nice and chewy, it had the right amount of nuts to caramel ratio, but again was disappointed at the small amount of yoghurt coating on the bottom, I would have liked more of the yoghurt coating. I thought the box the six bars came in was way too big for the small bars that were inside it, over packaged which is not needed in my opinion.

I won't be buying this particular nut again, not big enough to support my appetite, unless I eat 2 or 3 bars in one sitting, and if that happens it really would become a problem with the amount a box of Caramel Cashew Nut Bars normally retails for, I would go broke very quickly.

I picked up a packet of these today in my weekly shop. I am a big fan of nut bars, especially compared to your standard museli bar. I love caramel and I love dried yoghurt as well. So when I saw these bars on display I thought they would be my perfect bar. I was not too far wrong.

The box itself is a standard snack bar style box. I did like the presentation of crisp white background, and the font held my attention. The blue colour is also nice and vibrant and inviting. The box holds 6 bars only, which for the price (not on special) was quite hefty. Inside the bars are wrapped in the same blue which is a nice tie in with the box.

I found the wrapper very easy to get into which was great. The plastic wasn't as heavy as some bars come wrapped in. The bar itself looked nice if not a little more like a muesli bar. The bottom of the bar is coated in yummy yoghurt, the bar itself is a mix of nuts, cashews, rolled oats and I would say rice crispies. The taste was really spot on though. It had the satisfying crunch of nuts without being too hard for my teeth to break. The salty caramel was delicious and mouth-watering. I did end up eating more than one because they were so moreish. However, with 6 in the box I doubt this would last me more than a day or two which lowers the value for money. Still, very tasty and indulgent.

These by far are my favourite bars for lunchtime at the moment! Ive never been a huge fan of "bars" but in recent times have turned to them for something quick, easy and sweet in my lunch... I find i always save mine till last and its very much my "treat" of the day. These appealed to me straight away as they are named "Caramel Cashew"... Where the caramel comes in im not entirely sure but you can definately taste it!

The second reason why i choose these bars over others was the special they were on (lets be honest, price is a big factor)... Although they retail $4.19 a box, i have found that they are often (like every second week it seems) on sale for two boxes for $5... Perfect! My fiancee will choose another flavour as he's not that keen on caramel, but in saying that he will eat these if there's no others in the pantry!

I also love that there is actually real nuts in these (and you can even see them!), makes me feel like i am eating something half decent. They probably arent the best for you if your looking for a healthy snack, but for me they work perfect as a treat, have enough sweetness to make it feel like a treat and keep me going for the day! Definately recommend these to others

6 chicken tenderloins covered in a crisp and crunchy crumb, cooked to perfection and served with a dip of your choice. Sinfully delicious.