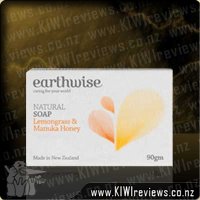 Disclosure StatementFULL DISCLOSURE: A number of units of this product have, at some time, been supplied to KIWIreviews by Earthwise or their agents for the purposes of unbiased, independent reviews. No fee was accepted by KIWIreviews or the reviewers themselves - these are genuine, unpaid consumer reviews.
Available:
via Online Store and selected retail outlets

Directions: Lather soap on skin with a small amount of water and wash as usual. Rinse skin thoroughly and dry with a clean towel.

I am a huge lemongrass scent lover! I was excited to see this on the market. As usual with Earthwise the packaging is fully recyclable but still eye grabbing and good looking.

As soon as you open the soap you get a whiff of the scent! It is divine! I like that this is not to harsh on my kid's skin. Two of my children and my partner suffer from eczema so I need to watch what I use with products that will be in contact with their skin.

The soap feels nice and creamy while you are lathering it on and leaves your skin feeling soft and very well moisturised. I love the feel of it while using the soap, soft like silk! It leaves you smelling great and the scent lingers. It also leaves the bathroom smelling delicious! I am not usually one for bar soap opting to use a body wash but I love this and it is better for the kids as body wash makes its way down the drain pretty fast around here.

A bar lasts around a week here being used for the showering and bathing of two adults and three children which I think its great value!

Upon opening the visually appealing box you are hit with a divine, appealing treat for your senses and a pleasent surprise that the bar of soap was larger than average. I really looked forward to my morning showers and been able to lather myself in the gorgeousness of this soap. I really liked that it didn't lather just into a pile of bubbles that didn't actually do anything.

The Earthwise Lemongrass and Manuka soap seems to moisturise your skin as it cleans leaving a delicate scent on your skin and making me even more reluctant to get out of my morning shower as I wanted to soak up the lingering smell as long as possible.

The only downsides for me was the bar was rectangular rather than moulded which I found harder to hold as I have a slight disability in the hand I use to wash myself and found it harder to hold without dropping it, and the other downside is knowing the soap is eventually all going to be used up.

I will definitely be buying Earthwise soap again even though it cost more than your average bar, it is worth every cent.

The Earthwise Lemongrass & Manuka Honey Soap was beautifully presented in the familiar earthwise packaging, clean and white with simple flower petals on the package. Upon opening the box the fragrance is just breath taking. I left it on the bench and the kids picked it up, Mum smell this it's beautiful! It was lovely to see the delight on their faces on inhaling the aroma.

The soap itself survived its first week in the family, our kids are notorious for leaving soaps in puddles of water or on the bottom of the shower so they end up being puddles of sludge... I'm happy to report that this bar withstood the test and was still soap after a week with the kids.

The Earthwise Lemongrass & Manuka Honey Soap got the kids clean and fresh, and didn't cause their sensitive skin to react, which is something we have to be really careful with when it comes to purchasing skin products. Now the big question would we buy this again? Absolutely! I loved the scent of this soap, in fact my husband caught me sniffing it a few times, it got the family clean without any skin reactions and it proved its durability.

The first thing I like about this product is that it is Made in New Zealand, it hasn't been tested on animals. It's GE free, has no toxic chemicals and is recyclable. These are always very good things for a product to be, and it is so nice and easy to read this as it is at one end of the packaging, in clear view and not hidden away by a mass of words around it.

My husband, my mother and I all used this bar of soap over the last couple of days and we all had the same point of view in regards to the soap. We really like the smell that is this bar of soap. You can smell both the lemongrass and the honey with neither overpowering the other. Both seem so subtle yet so strong at the same time. There is no doubt that both smells are there, they both linger, but don't overtake your senses.

We all liked the feel of the soap, it has a silky quality to it that makes it a really nice soap to use. The silkiness of it also fits in so very well with the smell and the design on the box itself. The only thing we didn't like was that it felt like we needed to use more water than normal to get all the soap off of our hands.

This is still a great item, and we are all agreed that we would use this again.

As soon as I opened up the package all I could smell was the delightful smell of lemon. So strong, you don't often get soap with such a strong fragrance and considering this is naturally scented the fragrance is really intense. I love the smell of lemon so it made me want to use the soap straight away.

The soap was very effective, I managed to work up a good lather to apply to my skin. It felt great on the skin, really refreshing and it also left the skin feeling very moisturised. I'm not sure if it contained cocoa oils because mostly the ingredients list was pretty foreign to me but it left that feeling on the skin that cocoa butter/oil does, very nice!

I like that it contained lemongrass and manuka honey as I'm 99% sure that these ingredients are natural anti bacterial's. Always a plus when you have something that kills germs too, with all the germs around these days. A great soap to have at the bathroom sink or even the kitchen sink to sanitise your hands without all the nasty chemicals of some of the hand sanitiser's out there.

In fact I would be pretty happy to have it on display on a soap dish as it looks a bit more fancy than your normal supermarket bars of soap - I think because of it's rectangular shape rather than a moulded shape bar. I think the last reviewer said they would put it in a gift hamper and I agree the packaging and the soap itself are attractive enough to give as a gift.

The real plus with this soap is that it is environmentally friendly and doesn't contain the nasty chemicals. I like how it states on the packaging though that all products do have some impact on the environment, very honest!! Even the packaging is made with recycled cardboard and printed with vegetable ink so they are doing everything they can to minimise the environmental impact.

I got to try Earthwise's Lemongrass & Manuka Honey Soap bar this week. The first thing I noticed about it was the smell. You could not fail to notice the smell, as it comes right through the cardboard box. That super strong lemongrass smell really packs a punch. It almost smells comforting, like a hot cup of lemon honey when you are sick.

The next thing I noticed was that the box is pretty nice looking, all recycled cardboard and safe inks. I felt like the presentation could easily be acceptable in a nice gift basket for Christmas. The price is pretty reasonable too. Its a large bar of soap and the way it lathers means it will last a long while.

When I stepped into the shower, I started rubbing the soap between my hands under the water spray. The lather took a long time to build up. I'm used to soaps going sudsy immediately, so this was a bit harder work. The lather was very tight small bubbles and felt almost like a body lotion. I used it all over and used it several times.

What I noticed was, that it made me squeaky clean. It removed all the grime and oils from my skin so I got that sticky clean sensation. The smell of the bar lingered on my skin even after I dried off. This was very nice, because other body washes I have used in the past haven't lingered like this. Overall I was pretty impressed with the soap and especially the fragrance. I think it will be economical too because of the low suds approach.

As a family we have been trying to use products that are a little less damaging for us and our environment so I was keen to try this soap. My children's skin has been reacting to our regular main brand body wash liquid so Miss Five has claimed this as "hers".

She likes the smell which, although a little overpowering, is really nice. She also liked how it cleaned her and how smooth her skin felt afterwards. This soap doesn't seem to leave skin dry so is a bit moisturising. Her skin hasn't reacted immediately to it and Miss Four and Miss One are happy using it also. It does leave the skin slightly scented so my children all smell ultra clean and yummy.

Although a "natural soap" the ingredients list had me a little baffled with chemical looking names and numbers. I just trust that it is all natural...?

We do like this and it looks as though the kids have monopolised this bar. As with all soaps I now need to get a nice dish to keep it in! I would happily buy this to use as a body soap or as a hand soap. The smell is great in the bathroom as well.

With the Scotch-Brite Easy Erasing Pad - now you see it...now you don't! No cleanser required, just a touch of water and you're effortlessly erases stains you thought were permanent patterns on your household surfaces, like crayon on the wall, scuff marks on the floor and hard-water stains in the sink.