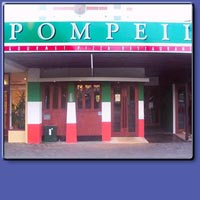 She was opened in 1988 at a big site in the Foodtown carpark, re-located to her current site on the Square in August 2001, and is still one of the most popular dining destinations in PN.

Her original concept was fashioned around a large Pizza style BYO restaurant that provided a delivery and takeaway service as well.

She is still delivery and takeaway but now both a BYO (Wine only) and Licensed restaurant with a comprehensive menu that also includes a "non-solo pizza" section ("not just pizza" menu).

I have dined at Pompeii many times, and I am always impressed. I love the fact Pompeii is BYO wine.

The garlic bread is just TO DIE FOR, with real garlic on a toasted pizza base. The fries are great too with a tasty seasoning. The pizzas - huge servings, and a wide range of toppings, from the classic to the more adventurous. I love the fact the kitchen area is viewable from the dining area. Indicates there is nothing to hide.

The waitresses are always friendly and attentive.

If you have room, try a dessert pizza - or do what we did, go there JUST for dessert!!! We asked the waitresses if we could choose/add/remove what we had on ours and they were only too happy to. They are huge, you will need a friend to help devour it!

Well, it was a games night. Four hungry men ready to sit down, drink beer, and play boardgames and talk guy-talk. We needed food to fuel our brains. After three beers we'd need all the help we could get. :)

We wandered down to Pompeii with $50 and a mean appetite. One COLOSSUS sized Roman Empire pizza. We customised it a bit. We took off the mushrooms and had the Thai Beef Strips thrown on instead. See their website for the menu.

Still had plenty of credit, so we ordered a couple of Garlic and Mozzarella pizzabreads, and a Garlic and Parmesan pizzabread, plus a portion of chips, and as a final touch, a crisp green salad. We walked off with 60 cents left.

Grabbed the food 15 minutes later and headed back to the games venue. After spreading all the food out, we tucked in and chowed down on some of the best food I have tasted in quite a while.

The garlic & cheese pizzabreads were divine! Though the mozarella was a creamy, melted-cheesey delight, my favourite was the parmesan... tangy tastebud tingler. (Try saying that 5 times rapidly.)

The chips were seasoned with herbs and spices, giving them a really appealing bite, making them more than just fries. They were gourmet fries.

The pizza was really flavoursome, stacked with toppings, and really easy to eat cleanly - a rare quality that I prize highly in finger-foods.

Overall, most impressed. And I want to make note of one other major factor. The lovely lady who served us did a wonderful job, presented us with the highest service, and did a wonderful upsell on us. I had to laugh when right at the end she hit us with the classic line... "Do you want fries with that?"