« Magic: The Gathering - Duels of the Planeswalkers review 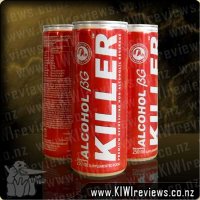 Disclosure StatementFULL DISCLOSURE: A number of units of this product have, at some time, been supplied to KIWIreviews by Alcohol Killer or their agents for the purposes of unbiased, independent reviews. No fee was accepted by KIWIreviews or the reviewers themselves - these are genuine, unpaid consumer reviews.
Available:
at selected quality retailers, and via the online store

ALCOHOL-KILLER is a non-alcoholic carbonated beverage with a refreshing bitter lemon taste, an innovative functional beverage that enhances the body's natural detoxification process. AK contains a unique combination of natural extracts, a unique blend of other high-quality natural ingredients and spring water from the Austrian Alps. Since AK has natural composition and works with and not against body chemistry, it can be consumed daily to hydrate and replenish. AK contains no artificial colors, flavors, stabilizers, preservatives, caffeine, nor taurine.

AK works naturally with the body to reduce the harsh effects of alcohol and is an effective remedy for hangovers. Clinical test results from Europe and the United States have shown that consuming ALCOHOL-KILLER immediately prior to and immediately after consuming alcohol results in a significant lowering of breath ethanol levels.* Consuming AK is not a license to drink and drive. Driving while intoxicated is unethical, illegal, and dangerous. The length of time during which the amount of alcohol in the body decreases varies with each individual and depends on factors such as age, gender, body weight, metabolism, diet, general health, and the amount of alcohol consumed. ALCOHOL-KILLER does not prevent intoxication. The creators of AK urge all who drink alcohol to act responsibly.

ALCOHOL-KILLER is approved by the Office of Public Health Services of the Slovak Republic, EU, No: BPOVO/1613/2005/Trs. According to the jurisdiction of the EU Court of Justice, this approval is considered valid in other EU (European Union) member states, as well as in EEA (European Economic Area) member states.*

* These statements have not been evaluated by the FDA. This product is not intended to diagnose, treat, cure, or prevent any disease

Let me start by saying I'm not a heavy drinker and I dont drink every weekend but when I do go out, I make the most of it :) So I'd say once every 4 - 6 weeks I arm myself with a dozen of my favourite beers and have a great night and wake feeling like c@#p the next afternoon :)

I was hesitant about AK, surely no product could do what they are saying! What harm could it do to try? I had 3 beers before I had my first AK. I really enjoyed the taste, anything lemon is a hit with me. So lemon, crispy and refreshing is the perfect combination in a drink. I decided to have an AK after each lot of 3 drinks but left the last one for the morning. I prayed it would work! I woke nervously expecting a pounding head and queasy tummy but felt surprisingly good so quickly drunk the last AK before anything happened.

So, overall I would say AK works but to be fair I think I'd have to have another try ;)

I was expecting something more like Lift Plus or Lemon/Lime when I read "refreshing bitter lemon taste" so this was quite a surprise for me. Maybe not the greatest of surprises though. I made the mistake of tasting it "slightly chilled" as suggested on their website and I found it to be really unpleasant. After chilling it for 2 hours the taste was a bit more subdued but still not all that appealing. But to put that into perspective, I was still utterly sober.

After a few pints of cider I tried another can. The taste was fairly well masked by the cider-soaked taste buds but it still tasted quite flat to me but I did notice that I wasn't getting that fluffy-fuzzy feeling U usually get, so it showed signs of doing what it promised. Another 4 pints later and a chaser or two of Midori and I felt it was time for my third can. Couldn't taste a thing because the Midori was still coating my mouth with yummy melon fire. If my usual pattern held true, I was about half an hour away from an enforced nap.

45 minutes later and I was still awake, vertical, and happy but not slushy. To say I was impressed would have been wrong. I wasn't in any state to think clearly or rationally. This was proved by my public attempt to dance. There is a reason I don't dance. I traded in my two left feet years ago, and got a monkey paw and a donkey hoof instead. It was time, that tiny rational voice in the back of my head was screaming, to glug back can #4 and hit the sack.

The morning was either going to be the usual dry mouth, groggy feeling, the whole universe is overcast kind of day, or something marginally better at best. So to awaken feeling a little seedy but otherwise pretty fine was a shock. A few glasses of water, a plate of sliced Granny Smith apples drizzled with a bit of Manuka Honey, and I was ready to face the day as though I had spent the night nursing no more than 2 pints of regular beer.

All in All, this performed really well, but the taste of this drink really needs some work. The first two cans were hard to gag down, and if I hadn't thrown the Midori shooters into the mix I doubt I would have gone past the second can, reducing the effectiveness of this to near-nothing I think.

With four non chilled cans of AK, A great Party, 3 drunks and a sober driver, AK was a pleasant rescue for the morning after, all agreed the taste was somewhat weaker almost a watered down taste, than was expected, but it wasn't a problem to drink.

The sober driver felt more awake nearing the end of a long night. Consuming a can of AK about an hour before the party came to an end, slept well too.
One drunk, drank before going to sleep, and woke reportedly very clear headed, the other two drunks woke sporting the nasty head and stomach that a good hang over brings, but within half an hour of downing AK felt they could get on with their day without a problem, almost cured. (Not completely, but a vast improvement)
All in all I give AK a thumbs up for the combination of ingredients that surprisingly does leave you feeling refreshed, as for the taste once you are past the first mouthful, it is quite pleasant without a nasty tang that one would expect after reading the back of the can.
I do believe that if I knew my day or night was to be a hard one, AK would be the drink of my choice to have on hand, for overcoming the battle of which would be the following day (Drinker or not), It did do what it claimed. However it is a small 250ml can, and the price of $4.50 does raise my eyebrows.

I was so excited to try this drink - the thought of having something to help avoid a hangover and make me feel refreshed instead was great!!.
I made sure on the night of trialling this product I had some dinner and also a can of Alcohol- Killer and then I enjoyed a few alcoholic beverages as well as another can in between - and when the night was over I finished with another can too.
In the morning I woke up still feeling a little groggy but reasonably alert. I promptly had a can which I have to admit did make me feel good for the start of the day.
Overall I enjoyed the taste - it was crisp and a refreshing citrus taste. I put my cans in the fridge to cool down as well as I don't think I would have enjoyed it as much at room temperature.
Would I try this product again? Yes - I would as I do feel it helped avoid a more unpleasant morning!.

For quite some time now my body has been quite against a couple of drinks here or there. However I've tried Alcohol Killer twice over the last week (2 different weddings) and I'm back baby.

To taste it is sharp and crisp, a very lemony taste rather than other citrus fruits, but very drinkable, definitely nicer cold than straight from the cupboard however. The can isn't too big so easily drinkable in one sitting.

Both my husband and I (who also had some) woke up the morning after feeling refreshed and alive not like we'd been dancing the night away till 2am. Having tried other remedies in the past and them not working I am 100% impressed with this and will both be recommending to friends and buying some more.

The blend of Cucumber and Watermelon is truly sensational. Fresh, crisp and mouth watering good, this blend will leave you wanting more. Best enjoyed chilled over ice.