My True Story: Give Us the Vote! review 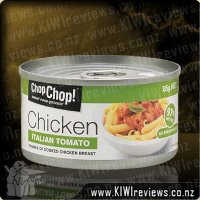 Disclosure StatementFULL DISCLOSURE: A number of units of this product have, at some time, been supplied to KIWIreviews by Davies Foods or their agents for the purposes of unbiased, independent reviews. No fee was accepted by KIWIreviews or the reviewers themselves - these are genuine, unpaid consumer reviews.
Available:
at local supermarkets

I used to watch the adverts on TV and think "no way, chicken doesn't belong in a tin" until another mum bought some into the playgroup my youngest and I go to so I took a taste and was a little surprised, it wasn't as bad as I thought and I have bought some of the other flavours as well but to be totally honest it is not something I buy often.

I did lie the taste but tuna belongs in tins not chicken so I will not buy it often but do recommend to others that don't mind and want convenient sandwhich fillings or salads. I have tried some on pizza, some in a sandwhich and some in a salad so I feel I have given it a good chance but still not 100 % sold on the idea of chicken in a tin.

I really got into the Chop Chop Chicken range when they were released, much to the horror of my friends and family. "Urgh! Chicken? In a tin? No way! Yuck!"

After being very sneaky (taking said chicken out of tin and putting into a ramekin along with the cheese and crackers) they sampled, they swallowed and asked for more! *insert evil cackle now*

Anyway, back to the review.... they are convenient, they are tasty, they are versatile and they are good value for money. AND the Italian Tomato flavour is the lowest in fat and all that malarkey so if you are following a diet plan, this little tin will help you along.

Having said that, it isn't my favourite flavour, I'm a Wholegrain Mustard fan. This is just a little too tomato'y for me, but still is a great snack with a couple of crackers and a nice piece of brie. Works well on a pizza too.

When it comes to chicken in a can, I would have to say this is the best flavour for our house.

We like to use it on pizzas, in wraps, in pasta dishes, in sandwiches, the list is endless, and it is so handy. It saves the preparation time of cooking and dicing the chicken, and it has a subtle flavour, not too strong to overpower other ingredients, but enough that it isn't bland.

I think this could be added to a dish in our house at least twice a week, which makes it quite a handy wee ingredient.

There has to be one that just doesnt quite do it and this flavour would do it for me.

I cant quite put my finger on it. It was lovely and fresh but I just didnt enjoy the flavour.

The convenience of this range of chicken is fantastic! The possibilities of ways to enjoy them is endless. Its so easy to just pop in your bag for a snack on the run or in the kids lunch box.

Fantastic and thank you :)

Having been lucky enough to try all the flavours, how do I rave about this without using the same superlatives as before??

What may come as a surprise to many is just how fresh the chicken is, it doesn't taste like something out of a can. If you use a fork to pull it apart as you mush it into a sandwich, it still looks like real chicken. Honest to goodness fresh tasting chicken in a can!

I now love having cans of these in the pantry, they are very handy for whipping up a fast meal. I used this particular one in sandwiches for me and Miss 5. Given she actually ate all of hers, that alone is testimony to the flavour and freshness! This would also be perfect as a fast meal stirred through pasta.

This has a really lovely and pleasant Italian taste to it, one that is subtle and enjoyable, not at all overpowering, I think they got the use of the right herbs bang on!

The only thing I don't like about the chunks as much is that I don't feel it goes as far as the shredded flavours so I would probably prefer to buy this in the larger size unless I'm making a meal just for me.

Definitely one to keep in the pantry.

This was one that I was really hoping for a lot from, and though I wasn't reallt let down, it didn't quite live up to my hopes. I say this in all honesty - it is NOT in any way unpleasant or substandard - it just could have been so much more than it was.

The tomato and spices came through so clearly, but it seemed to be missing the herbs that true Italian cooking carries with it. Where was the bite of sweet basil, the touch of thyme? Alas, these were some of the key flavours I really wanted to find coming through, but just didn't really make it past the tomato.

However, I wasn't the main sampler. Being another "chunk style" it was fated to be enjoyed by my party guests, and enjoy it they did. Served on plain rice crackers with shaved Parmesan cheese and a freshly torn basil leaf, this was a hit with everyone who tried it. In fact, I should have gone out and bought a few more cans, because I had not even made it half way through the gathering before the plate was empty. I am certain I saw hands sneaking back for seconds!

All praise was heaped upon this, as well as other flavours, and no-one made complaints other than "Where's the rest? Why isn't there more?" which is always music to a host's ears. On the basis of what I heard, this is certainly going to be a flavour I keep on hand for parties. In fact, I am very glad to see that it is available in larger cans.

In summary: Another excellent option, if not quite as good as I was dearly hoping it would be.

Long long ago I was made aware of the joys of Italian cuisine, REAL Italian cuisine... and though it would send a million Italian mothers spinning in their graves to even think of fine Italian food in a can... I have to admit, this was pretty darned tasty!

Each 85g can has enough chicken to cover two slices of toast, or a single serve if mixed through 3/4 cup of freshly cooked Penne pasta. Add a handful of freshly steamed mixed veges and a small green side-salad (drizzled with some seriously tasty Black Raspberry Vinaigrette) and you have a lovely meal for two.

OK, so there wasn't a lot I could do with this, mainly due to the portions I had to experiment with... but experience and imagination lead to all sorts of wonderful possibilities. With enough of this stuff I could see some wonderful cannelloni, a tasty dish with steamed rice (as I did actually do with the Teriyaki version), some interesting ideas involving steamed dumplings... the list is quite extensive really, and limited only by your taste preferences and imagination.

The larger, 130gm cans are slightly better value, and would offer you more to 'play with' - I may just have to get some of those and see what can be created in #Foodlab. And no, there are NO plans to try a "Chop Chop Chicken Cheesecake!

#FoodLab DOES do more than just desserts y'know.

Overall, this was my favourite of the samples tried... and certainly one I plan to try more of.

Gets along with everyone. Has a contagious happiness that spreads like wildfire and always makes the best out of everything. Tops the taste charts with its rich, creamy perfection.

Spread it on your favorite cracker or mix it with some mashed potatoes instead of sour cream to get a lot fewer calories and a lot more flavor, which is never a bad thing.

Anywhere and any time you want. Because being Original means just that - being original.