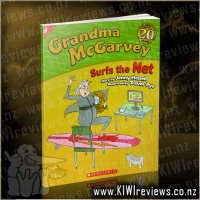 Disclosure StatementFULL DISCLOSURE: A number of units of this product have, at some time, been supplied to KIWIreviews by Scholastic (NZ) or their agents for the purposes of unbiased, independent reviews. No fee was accepted by KIWIreviews or the reviewers themselves - these are genuine, unpaid consumer reviews.
Available:
June 2011

When Grandma McGarvey receives a flyer announcing a 'Surfing for Seniors' course, she's keen to give it a whirl!

But where's the water? And what's with all these computers?

The Dodman has begun his reign of terror in Eidolon. Amassing an army of trolls and giants, ghost-dogs and goblins, he is determined to lay waste to the magical Secret Country - and destroy its Queen forever.

Now Isadora must return to her world, leaving her family behind, and lead her people against the evil Dodman. Horrified at being left behind, Ellie follows her mother to Eidolon - and walks straight into danger. Captured and held hostage by the Dodman, only Ben and Iggy can save her and protect the Secret Country from becoming enslaved once more...