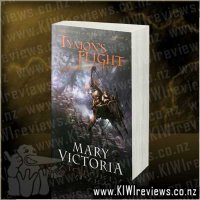 Disclosure StatementFULL DISCLOSURE: A number of units of this product have, at some time, been supplied to KIWIreviews by HarperCollins or their agents for the purposes of unbiased, independent reviews. No fee was accepted by KIWIreviews or the reviewers themselves - these are genuine, unpaid consumer reviews.
Available:
September 2010

When he meets a despised Nurian slave in the city baths, his dreams of freedom take on a completely different meaning.

Banished to a drought-ridden colony, Tymon falls in with a group of Nurian rebels and finds himself facing difficult choices. Fighting for freedom and power is not so enticing when it may mean betraying his own people and severing all ties to the only world he's known...

The fantasy genre has, for many years, been something that held little appeal to me - I prefer sci-fi that's heavy on the science aspect... I like to know the why's and how's, as well as the what's, where's and who's. In the last couple of years I have, by sheer necessity, been required to read more fantasy for review, and I must say there have been plenty of pleasant surprises... and this could easily become another of them.

This story is certainly fantasy, but it carries strong resonances with Larry Niven's "Integral Trees' from his "Ring of Smoke" stories... a world in which humanity is forced to live in a giant botanical environment, and has been there long enough to forget it's true origins... yet there is also an element of 'the Force' from the Star Wars saga. In this case its not 'the force' but 'sap' - a living force that guides those able to interact with it... and it has it's dark side too, in the form of 'demons' - creatures that live in the energy swirls but able to take on human form in order to manipulate humanity for their own dark purposes.

I think that this hybridisation of familiar concepts is one of the biggest factors that give this tale such a broad potential base of fans. Old ideas given new life through creative mixing and reinvigorating... that's what keeps innovation going.

Overall, though some of the characters are yet to take on anything more than a superficial existence and the key elements of the ongoing tale are far from being more than mere sketches of their full selves, I get the feeling that further stories are going to tease these threads out until we can see the bigger tapestry of the story, and the world it is based in. There are many hints towards the possible paths the next couple of tales could take and it will be interesting to see how Mary Victoria takes us down the road...

The Spysons are just your average, everyday family. Yes, they live in a top secret mission control bunker. Yes, their car is a classic spy model and can drive all by itself. Yes, they have a pet chameleon that is always in disguise. Yes, they are on a stake out in the middle of the night. Yes, their family motto is 'A Spyson is always suspicious'. But that is nothing out of the ordinary. Welcome to Freak Street, a street like any other until you take a closer look.