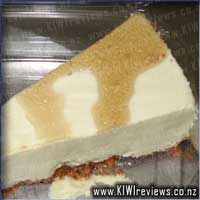 Disclosure StatementFULL DISCLOSURE: A number of units of this product have, at some time, been supplied to KIWIreviews by the company for the purposes of unbiased, independent reviews. No fee was accepted by KIWIreviews or the reviewers themselves - these are genuine, unpaid consumer reviews.
Available:
at your local Hell outlet

Sinfully delightful white chocolate cheese, with a hint of Kahlua.

A nice, quick and easy dessert. It's a good portion size, but for the price of $4 you'd expect to be at least a little better. When I got this, I was looking forward to the taste, but I could barely tell that there was Kahlua in it, definitely is just a hint of Kahlua. I also found that for my personal taste it was a little too creamy, though my husband did agree with me, and there is no real strong flavour to it, which in a way is a disappointment.

It is, by far, not the best cheesecake that I have ever had, but it also isn't the worst, so I'm sure that I will get again in the future, but only if I have a slight craving for something sweet and have the $4 to spare.

This is one of those desserts you really wish wasn't so expensive. Sure, it's light, delicious, sweet and creamy... but it's also about half the size I expected.

OK, so it's good for those trying to watch their waistline I guess... but I'm not one of them, so I was looking for something about twice the size.

The texture was creamy and smooth, with a tangy biscuit base that made it a delight to eat. Not much of a Kahlua fan, I was a little worried about the flavour, but found that there was only the barest hint there... not too good for those craving a decent -hit- but then, you can always add a little extra for yourself.

Overall, one of those dessert you'll 'treat' yourself with, not one for the general after-pizza feed.

Golden crumb-coated veal fillet, with mozzarella cheese and ham, accompanied by potato scallops in a cheese sauce, carrots and beans.