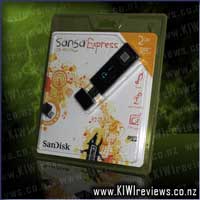 *** Based on continuous playback at 128 Kbps MP3; rechargeable batteries may require eventual replacement; actual life and performance may vary based on usage patterns.

When I first received the Sansa Express, I was pleasantly surprised at the aesthetics of this product. Having the package in my hands, I can definitely see that it appeals to teenagers and people wanting form and function. The face of the product has a metallic screen, which, although it makes the product look good, it picks up fingerprints very well. The mp3 player comes with 2GB of memory built in, with the option of expanding on that with a micro SD card. This feature is something that sets this mp3 player apart from the rest. I was amazed with how easy it is to load music and other files onto this device, and how quick it was to copy them. Another thing that this product is great for is the audio quality - normally music through headphones/earplugs sounds muffled, but the earplugs supplied with the mp3 player have great sound quality. As this mp3 player is small and compact, it can be taken anywhere, and won't take up too much space in your bag. The only downside with it is the fact that, because it is small, it can be lost easily. The mp3 also comes with a voice recorder which is useful if you need to record meetings or classes (if you're a student like me), and saves the recordings in a .wav file. I also found the radio function to be useful as it scans for any FM frequencies, and can 'save' up to 20 FM presets - so you can turn off your mp3 player and come back to your favourite radio stations later on. For all these great features I think the price of the Sansa Express is justified, as you get a great product for a decent price.

I seriously don't know where I finally stand in regards to this little MP3 player. I have wanted some kind of MP3 player for a long time, as I basically like having music playing as often as possible. So I was over the moon to receive the Sansa Express to try out, and quickly loaded it up with favourite songs of which I was able to fit a fair amount, being a 2GB, then started carrying it with me everywhere. Its compact size meant it was a lot more comfortable to carry about than some of the other MP3 players I've come across, being small enough that it sat in my pocket where, unless I was playing the music, I often forgot it was there, yet large enough that it wasn-t fiddly to operate. The songs came out nice and clear - and LOUD (great volume on it!!), and the FM radio feature was most definitely a bonus, even managing to pick up a couple of stations that I usually have trouble trying to tune into. So far, this lil beauty was getting a 10/10!!!!
THEN the problems started. Suddenly, it starts locking up on me part way through a song (and it wasn't always the same song), the screen would go black, and basically it refused to do anything, not even charge up through the laptop (during these times, the laptop wouldn't even acknowledge it was plugged in!!), or even turn off (I could still hear through the headset that it was still turned on, despite the fact that it wouldn't play any songs)!! It wasn't until it had completely drained the battery before it would finally register on the laptop, and would start charging up again. Once fully charged, it would play fine again - until the next time it happened, and then I'd have to wait another 24hours plus before it had drained and was ready to recharge once more. This happened several times, until it got to the point where I just stopped using it. Even when I was sent a replacement, it wasn't long before I was getting the same problems, and others, happening again. Even removing the .wav and .wma files from it and leaving it with just proper .mp3 files didn't stop the bugs from attacking - now it was just a different kind of bug. A real shame, as when this player is working properly, it really is a little gem of a player - but there are still a few bugs that need evicting, which is why if this section had a "personal choice" selection, it would unfortunately get a score of one, whereas it started off with a score of ten!! However, considering how well it goes when it IS working properly, I'm rather looking forward to checking out the next model to see if things have improved.

Well, this one was a real rollercoaster of a ride... allow me to explain...

Shipped over from the suppliers in Australia, the box appeared to have taken a hefty knock at some point, and this obviously affected the player, because even though it worked fine when first taken out of the pack, when the battery was running low, it didn't want to charge properly when plugged into the PC.

A quick call to the appropriate people, and a replacement unit was soon in my hands... this unit worked just dandy until the battery was low, so I slapped it into the PC and waited for it to charge up... instead I was presented with a demand to reinstall the MTP drivers required for the unit to talk to Windows. These drivers come as part of the Windows Media Player v10/v11 install... now I have WMP v11 installed, so I called up the Helpdesk and chatted to a very helpful man there. After 20 minutes, we decided to completely lobotomise the system of any knowledge of the Express, and try again from scratch...

This was a complicated little proceedure, which I won't go into here (For help, be sure to ring their NZ Helpdesk number on 0800 449 052), however, after erasing the hardware drivers, and reinstalling WMP v11, I plugged the unit in, with some trepidation, and watched the display screen on the Express itself... JOY OF JOYS! The screen lit up with the magical words "Battery Charging". An hour later, and it was at full power, I had filled it up with my favourite songs, and was able to wander off down the street to my favourite tunes.

As if that wasn't enough, when you get tired of the same tunes, you could do one of two things... you could either flip the unit to 'FM Radio' mode and groove to your local stations, or you could slide in a MicroSD card and listen to new tunes... this unit also has the ability to record radio for later playback, or even be a voice recorder for those notes on the run.

This is a tidy little unit, a mini version of the e200 series of players, just without the video capabilities. Nice and light, easy to wear around your neck, especially if you dump the standard earbuds and opt for something a little more long-term-wear-friendly, such as Verbatim's In-Ear Stereo Headphones.

Overall, despite a few hiccups in the early stages, when this thing goes, it goes GOOD! A few little warnings to keep in mind:
•  When the battery is low, you may have trouble charging it if your PC is loaded up with USB devices. Where possible, plug it diectly into a high-power port directly in the PC itself, avoid hubs and extension leads.
•  If you plug it in and your PC starts asking for MTP drivers, you need to reinstall Windows Media Player, or upgrade to v10 or better.
•  TAKE CARE upgrading the firmware, as any glitches in the process could cause the unit to become inoperable. Check your warranty carefully.
•  If you want to maximise your battery life, be sure to jump right into the 'Settings' menu and adjust the power features.
•  Charge the unit up fully before you start to play. A good long charge overnight will ensure you get the best life from the battery.
•  If you plan to travel, get yourself a good power inverter with a USB charging port, such as one of the Targus 150 watt units.
If you keep those in mind, you'll find yourself grooving to your favourite tunes with ease.