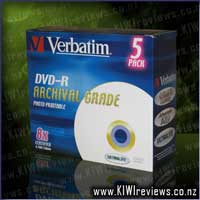 Disclosure StatementFULL DISCLOSURE: A number of units of this product have, at some time, been supplied to KIWIreviews by Verbatim or their agents for the purposes of unbiased, independent reviews. No fee was accepted by KIWIreviews or the reviewers themselves - these are genuine, unpaid consumer reviews.

What can I say... the creme de la creme of archival storage media, and inkjet printable to boot! It seems that the cutting edge is being pushed further and further by this industry-leading company.

Frankly, I wasn't entirely sure how to test this... after all, I don't want to keep the good folks waiting 5 years for the tests to finish... so I thought I would put a disc to the abuse test.

First off, time to fill 'er up... so I dragged out all the raw data I used to build our DVD of the day trip to Gravity Canyon, which came to just a tad under the 4.5gb storage limit. (Keeping in mind that the 4.7gb limit stated equates to about 4.5gb of safe storage.) Burning it at the full 8-speed it took a mere 14 minutes to burn it all... impressive enough...

Having burned discs at 8-speed before, and having data become unreadable within weeks due to low-quality discs, I thought this at least should be easy enough to test... so I left it for a week and tested it again... sure enough, no data corruption. The disc played fine on my PC, which is to be expected, but it also played fine on my PS2, which is notoriously sensitive, and often fails to play discs that were burned at anything above 2-speed, and also tends to fail when playing discs that are even capable of being burned at anything above 4-speed, regardless of the speed they were actually burned at. I figure I'll test it again in a few more weeks, and possibly do a follow-up in 6 months.

Testing the scratch-resistance is easy enough... Take 1 disc, apply face-down to a gravel driveway, rub vigorously... take disc (which now looks like a dozen cats used it as a scratching post toy) and, after thoroughly brushing it free of fine particles, slap it in the drive and spin it up. Anything still readable? Sure is... all of it! Surprisingly enough, even after quite a bit of abuse, the disc reads just fine! Stunning!

OK, time to unpack and burn Test Specimen #3... successful, of course. Now for the print test. using a high-resolution inkjet printer, I found some good raw artwork and set to work preparing it for printing. Slap it into the printer, let it run it's course on maximum resolution, leave it to sit for a few minutes to set dry, and then checked it. Not surprisingly, the detail was stunning. Nure, a lot of that had to do with the printer, but the disc plays a bigger part than most would suspect. Low quality surfacing can bleed the ink, causing posterisation and blotchy results... but that is just not an issue here... crisp, clean lines, sharp edges, no bleeding between colours... photo quality.

Overall, an excellent disc if you want your data to stay safe and sound for prolonged periods of time... though I'll try and confirm that in 6 months time.

Take it as a "No News is Good News" situation... I'll squark if the data has corrupted.