The Keys to the Kingdom: Sir Thursday review 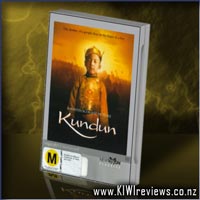 Disclosure StatementFULL DISCLOSURE: A number of units of this product have, at some time, been supplied to KIWIreviews by the company for the purposes of unbiased, independent reviews. No fee was accepted by KIWIreviews or the reviewers themselves - these are genuine, unpaid consumer reviews.
Available:
April 2006

Rarely have I been emotionally struck in this way by a movie. I am not ashamed to admit that I was in awe of, and driven to tears in places, by the story of Kundun, the 14th Dalai Lama, currently in exile to avoid being murdered by the Chinese Government, in order to cement their stranglehold over Tibet. Just a note, Kundun is an honourific title, not his name.

This movie tells of his early life, from just before he was discovered by happenstance. For those out there who are sci-fi buffs, this is so similar to the story of young Anakin Skywalker that you'll easily be able to get started on watching this... and you need to, because no-one should miss this tale.

From the time he was but a child, he has lived a hard life. Being the spiritual leader of a nation, the human incarnation of The Buddha of Compassion, is not a cruisy holiday. He came from abject poverty in a happy family home, the youngest child, and was thought of as special from the moment of his birth because he didn't cry. A chance visit by a senior member of the Buddhist Faith, who happened to be carrying the prayer beads of the previous incarnation, the 13th Dalai Lama. Young Kundun immediately claimed tham as his own.

Curiosity aroused by this, the monk returned with other senior monks, and more possessions of the previous incarnation. Flawlessly, young Kundun selected those which were 'his' from out of a pile of decoy items, each similar, but not quite the same as the 'real' ones. This confirmed his identity as the 14th incarnation, since how could a child know exactly the right items to select, if he wasn't the reincarnation?

As he grew, so too did his wisdom and inner strength and peace... until Chainman Mao Tse Tung, leader of Communist China, decided that Tibet should become part of the great Chinese Empire, joining the Motherland for the good of all the peoples. Mao believed that religion was a poison, the opiate of the masses, and that as religious leader, Kundun was a hinderance to the eventual peace and prosperity of all the Chinese peoples. Shortly afterwards, Kundun was forced to leave Tibet for exile in India.

Overall, this is a stunning movie, and if you have an ounce of hunaity in you, you should sit down, snuggle up with your loved ones, and watch this movie. If nothing else, the sheer devotion and utter respect this one man can engender in those around him is astounding. He may be mortal, but he is more than human. His Holiness, the Dalai lama is an inspiration to us all, and should be known as the guiding light that he is.

If the storm doesn't get you... they will!

As a category 5 hurricane tears through Florida, Haley (Kaya Scodelario) rushes to find her father Dave (Barry Pepper) who is injured and trapped in the crawl space of their home. With the storm intensifying and water levels rising, the pair face an even bigger threat lurking below the surface. This is an action-packed thrill ride with a nasty bite!