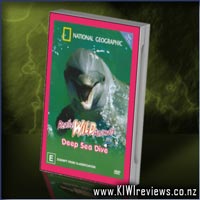 Disclosure StatementFULL DISCLOSURE: A number of units of this product have, at some time, been supplied to KIWIreviews by the company for the purposes of unbiased, independent reviews. No fee was accepted by KIWIreviews or the reviewers themselves - these are genuine, unpaid consumer reviews.
Available:
December 2005

Kids will love this visual exploration of the world's oceans from surface to seafloor.

Dive into fun and explore the world's oceans from surface to seafloor. Come face to face with great whales, friendly dolphins, scary sharks, and all the ocean's amazing treasures.

And don't forget the bonus features!

I was full of high hopes for this DVD when I first saw it. National Geographic just had to be good - right? Well, maybe this isn't one of their best efforts.

The animation, soundtrack, and black & white clips detracted somewhat from what really could have been a great film. I honestly felt the makers of this DVD would have held my daughter's attention far better had they employed someone with a voice that was more dynamic; Steve Irwin for example. Had they done that, they really would have been onto a winner.

The voiceover was a little flat and uninspiring, though the narrator was informative. The music was distracting and depreciated the disk, and at times, seemed to interrupt the flow of information, and did little to hold my 8 year-old daughter enthralled. Maybe she is too old for the disk, and maybe it would be better aimed at 2-5 year-olds. I really don't think older children will get that much entertainment from it.
The swapping between the old B&W scenes did little to add to the film or add any humour and I felt it would have been better to leave it out altogether.

That said, the National Geographic is known for their filming and the animal clips were excellent, second to none. The underwater photography was superb and engaging and full of life. The filming above the water was filmed to a high calibre too. There were many very clear and close up scenes within this film and that alone has much to rate it.

All in all, I would give 10/10 for effort, 10/10 for photography and 10/10 for information content; however, I really feel they missed out on this one by trying too hard. Shame really.

highly informative and entertaining to children, this title might not be all that appealing to adults. full of colour, movement and sound, this show was captivating to the group of kids who had invaded my friend's house and became the test group. afterwards I asked them what they liked and disliked and the likes far outweighed the dislikes despite the side effect of me dozing off in the beanbag when the songs came on. the only major dislike mentioned by the kids was way the songs kept interupting the learning or informational stuff, a sentiment I had to agree with. but as a whole, the title was actually pretty good. keeping in mind it is aimed at kids aged between 2 and 8 years old, if your young ones have an urge to learn, this could be a very handy tile, in fact series, to get yor hands on, and at under $20 it is not unaffordable by any means.

Angelina Ballerina tells the timeless tales of a remarkable mouse who dreams of becoming a prima ballerina.

Headstrong, passionate and feisty, she is a character children of all ages will relate to.