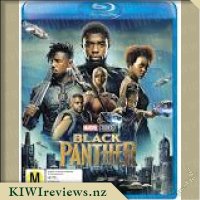 After tragedy forces young Prince T'Challa to assume Wakanda's throne, he is faced with the ultimate test, putting the fate of his country and the entire world at risk. Pitted against his own family, the new king must rally his allies and release the full power of Black Panther to defeat his foes and embrace his future as an Avenger.

I am somewhat of a fan of Marvel studios productions, so this movie appealed to me on the strength of Black Panther's being the protagonist alone! For all of us ordinary humans, having extra powers is very appealing so it is tempting, while watching one of these films, to picture ourselves in the story too. What a blast that would be!

As T'Challa, Chadwick Boseman is ideally cast. He plays the not-always-confident king to perfection, even when his role is challenged, but switches identities with panache when he moves into his Avengers alter ego as Black Panther. I loved the crouch routine on top of a speeding car; he looks more animal than human in this sequence, and I kept waiting for him to pounce! Nakia (Lupita Nyong'o), Shuri (Letitia Wright) and Okoye (Danai Gurira) are all strong women who are action heroines, techno savvy, and strong leaders. Intentionally or not, they are inspirational role models for black women everywhere.

There is a strong supporting cast which includes Michael B. Jordan as Killmonger, Martin Freeman as Ross, and Andy Serkis as Klaue - but there are also many extras who play a vital part in some of the pivotal scenes. Some of the crowd shots are quite stunning; the fight scenes at the top of the waterfall are attended by what look to be thousands of people arranged on a cliff face, and the spectacular car chase scenes are choreographed so tightly that they must have taken hours to organise so that nobody was injured!

Two things stood out for me in this movie - the makeup and the music. Good film music is integrated into the story so completely that you rarely register it; it is just there, setting the mood and picking up pace and energy at those times when the action intensifies. Goransson, the composer, has woven authentic African patterns into the music; it relies heavily on drums which provide atmosphere and a sense of urgency. When there are lyrics, the singers use the Xhosa language - common to the part of Africa where the imaginary kingdom of Wakanda is said to be situated.

The makeup is nothing short of amazing. The scarification which in real life is a raised pattern on the skin looked so realistic; in fact, it was all special effects makeup which had to be applied fresh each time. The lip plates cannot be simply inserted into an actor's lower lip; they would cause permanent stretching. In the movie, these plates were "hooked" on to that actor's teeth. Again, I was amazed at how realistic they appeared. The one thing that surprised me was seeing men with lip plates; I thought it was only African women who traditionally wore them.

I like the idea of a magic power being taken from a special metal (vibranium) - like Kryptonite in the Superman (DC Comics) mythology, it has a profound effect on the subject although in very different ways! Both vibranium and kryptonite originally descended to earth as meteors. Their creators were influenced by the original ideas of H P Lovecraft, whose meteor in "The Colour Out of Space" affected all of its surroundings when it landed. So vibranium is the latest variation on special-powers-from-meteors tales which are always a popular aspect of Science Fiction.

The onscreen banners are quite unique; I was intrigued by the way the cuneiform-like characters morphed into recognisable script, so I had to go away and check if this was a real script and whether I could install the character set on my computer. The script is known as Nsibidi and is certainly real, being used in areas of Western Africa in earlier times. But unfortunately, it is not available for electronic devices yet! It adds an exotic touch to the movie, ensuring that the viewer does not forget that we are on the African continent.

And finally, the special effects, which are always a big item in Marvel movies. I especially liked the occasional shots of the little boys playing on a city court, and their reaction when objects appeared in the sky. Their faces were the faces of innocence, symbolising that there was hope for the world after all. All the lighting and CGI special effects cannot replace the look of wonder on a child's face as he interacts with something he does not quite understand.

To sum it up - I enjoyed this movie; I thought it gave a very positive message about pride in one's own ethnicity and hope for the future, all couched in a medium that young people can relate to. And what is more, it was fun. We all had the same reaction after watching the movie: that was a great bit of escapism, so when are they releasing the sequel?

I had been told by a couple of people that this was the best Marvel Movie ever (this was said before Deadpool 2 and Avengers Infinity War had come out) and that I had to see it. By just seeing the previews it really did not appeal to me and so I was quite happy to pass on it completely (my husband was a different story). But after just watching Avengers Infinity War I was completely up to play with everything, until the Black Panther aspect came up and then I felt like I was missing out - so when the opportunity came about I knew I had to fit the jigsaw all together and watch this.

One thing I did like about this movie was we did not get the full back story about why he was a panther and how it all happened, but instead it just began assuming that the audience already knew everything. It was actually a welcome relief as I usually find with most movies (Iron Man excluded) it is boring finding out how the powers happened to come about and then the saga of how to use them carries on for the rest of the movie. I liked how you got little glimpses of the past and various aspects were discussed a couple of times but it was not completely obvious and in your face. The movie had a very natural flow and the story was easy to follow (although my husband did have to remind me that the Black Panther story was first introduced in Civil War).

Unlike most Marvel Movies I found this had no humor in it and it was more serious. It also was more political and race orientated than I was expecting. The only smile I had was when Stan Lee made his brief appearance (I just love his cameos). This movie was also more vibrant and breathtaking then most of the other movies and had so much beauty from the sky/sunsets to the waterfalls it just felt so magical and so inviting. I felt like this movie pulled out all of the punches. The special effects were amazing as always and it just left you feeling in awe. The casting was great as was the acting actually not a lot can be faulted.

My husband really enjoyed it and said it was very close to the comic book. Where as I did enjoy it and it did hold my attention I just did not find that I fell in love with any of the characters or the story. We watched this two nights ago and I am finding it difficult to remember the movie in its entirety as I write this. Maybe its because I was expecting him to be more panther like and maybe run on four legs or something more cat like. Even with his costume I did not really associate it to be a Panther and I was left wandering where the connection was. There is a scene in the movie where he takes the potion and next minute he is walking to a tree which is covered in panthers sunning themselves and then they change to be past ancestors but beyond that I did not really get the point.

I loved the city and the history of the movie and I am keen to see where the technology will take us. I would of liked it if they explored more of this area and just walk around more. But I am glad that it has been kept a secret and I am hoping in future movies they focus on his sister more. But like I said I did enjoy it but it just was no Deadpool or Thor.

"60 million years ago last Tuesday the mighty dinosaurs were wiped out. There are many reasons for this, and here is number 63."

From DECODE and Aardman Animations (Wallace and Gromit, Creature Comforts) comes Planet Sketch. Join a quirky collection of madcap characters like Captain Gagtastic, the supervillian who has a penchant for ruining family gatherings with his terrible jokes, the Japanese Fighting ... more...