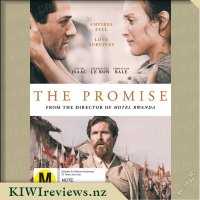 It is 1914. As the Great War looms, the vast Ottoman Empire is crumbling. Constantinople (Istanbul), its once vibrant, multicultural capital is about to be consumed by chaos.Michael Boghosian (Oscar Isaac), arrives in the cosmopolitan hub as a medical student determined to bring modern medicine back to Siroun, his ancestral village in Southern Turkey where Turkish Muslims and Armenian Christians have lived side by side for centuries.

Photo-journalist Chris Myers (Christian Bale), has come here only partly to cover geo-politics. He is mesmerized by his love for Ana (Charlotte le Bon), an Armenian artist he has accompanied from Paris after the sudden death of her father.When Michael meets Ana, their shared Armenian heritage sparks an attraction that explodes into a romantic rivalry between the two men even as Michael hangs on to a promise from his past. After the Turks join the war on the German side, the Empire turns violently against its own ethnic minorities. Despite their conflicts, everyone must find a way to survive - even as monumental events envelope their lives.

As a rock music lover who has been a fan of the Armenian-American heavy metal group System of a Down, and following the lead singer Serj Tankian on social media, means I've often seen articles and comments made by him regarding Turkey and the Armenian Genocide; namely the lack of any acknowledgement from officials that it even happened. So I heard about this movie through him, as he composed a song for the end-credits alongside the late Chris Cornell, and it piques my interest.

The film itself has a stellar cast line-up with Oscar Isaac (Star Wars: The Force Awakens, Ex Machina, X-Men: Apocalypse), Batman (I mean, Christian Bale), and the gorgeous Charlotte Le Bon. Charlotte was an interesting choice as while I was watching it, my flatmate walked in and the first thing he said was "nice french accent". I found it interesting because it is explained that the character had spent several years in Paris, and had returned to rediscover her Armenian heritage; I did not think anything of this until my flatmate pointed out the authenticity of the accent. A quick Google told me that Charlotte is actually French-Canadian in ancestry, so it led me to a question. Was the history of her character changed to get around her accent? An interesting thought.

The film started off rather generically; one of the issues with having big names in your film is that it becomes more difficult for your audience to truly see them as their characters, and then the audience may start to over-analyse every action. The film follows Oscar Issac's character Michael (pronounced Meekhell) as he works to progress from working in an apothecary to becoming a qualified doctor. The quick introduction of the woman that he "will learn to love", and the lively, beautiful woman who was married to Bale's character, leaves very little room for subtlety. The film wants a love triangle and takes no time throwing one together. It takes a while to truly warm up to the characters because of the speed at which we are introduced to them (admittedly they aren't really the important plot points in the film).

In this way, the pacing of the film seems a bit inconsistent. We are thrust into the film with very little backstory, and with the film focusing on the three protagonists, we see very little from the other side of the conflict. Reasonings and justifications from the opposition are hinted at, but it is very much the matter of noticing words that characters use, to assume their intentions. A lot of the film relies on your emotional investment in the main characters, to give you a feeling of a nation working against them, rather than giving you a single antagonist character that you can focus the negative emotions towards. It's a film that successfully instils the feeling of shifting goalposts; which while likely an accurate representation of the events, is sometimes frustrating to watch.

There is a lot of potential with the film, but it would have worked better if it was more firmly rooted in historical accuracy. I'm not by any means saying that the genocide didn't happen, but using fictional characters locked in a love triangle that coincidentally puts them at the centre of every clash that occurs, makes it much harder to take the film too seriously. What is accurate? Who is based on a real person? Who is fictional? I don't have the answers to these questions with a few exceptions. Something along the lines of the Band of Brothers miniseries would have been a better route to follow, but with far fewer survivors, perhaps that wasn't a viable option.

Slow to get into, but ultimately it managed to keep my interest. Was it satisfying to watch? Not at all. Was it meant to be satisfying? Well, no. This isn't a Hollywood film with a usual happy ending and the conflict resolved. There is only the Promise.

A young married couple becomes stranded at an isolated motel and finds hidden video cameras in their room. They realize that unless they escape, they'll be the next victims of a snuff film