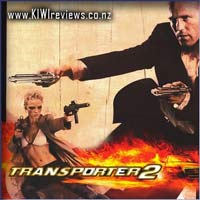 Jason Statham returns in his signature role: ex-Special Forces operative Frank Martin, aka "The Transporter." Now retired in Miami, Martin makes a living driving for a wealthy family, including a young boy with whom he has unexpectedly bonded. But when the boy is abducted, Martin must use all his skills to bring him home to safety and discover the kidnapper's master plan.

It is not often a movie sequel beats it's precursor, but this one sure did it, with aces! Full of action, tension, thrills and spills... and a STUNNING female lead in the delightful shape of Kate Nauta... oh I have developed an instant crush on her face... those eyes, the freckles, that mouth... oh baby... -goes weak at the knees- -grin-

Anyway, enough of the memories and back to the review... This movie really impressed me. After seeing the first movie on TV the other night, and being surprised by the high level of action and a number of stunning examples of skilled driving, I decided I had to give this one a try at least, see how bad the Sequelitis had become. Total turn-around of the usual trend, this one ROCKED!

Strangely enough, despite even the OFFICIAL website stating that he had bonded with twin boys, there was only ever one! I admit to being more than a little confused by this... but hey, Hollywood is more than a little around-the-bend at the best of times, so I guess this is just another example of it. Though I must say the shots were so well editted, I wouldn't have noticed if I hadn't read it beforehand.

Some of the stunts were so unlikely (eg. How to remove a car-bomb 101) that they had me snickering quietly, but as a whole the stunts were superbly done, and I was particularly impressed with the Aikedo scene, even taking into account the one fellow in the background taking swipes at thin air. When the fight really kicked in, it was awesome to watch.

Overall, this is a brilliant movie, and a rare gem indeed. It deserves it's place on my collection's shelf, and is so far the only sequel ever to prompt me to buy a previous movie, just so that I don't have a hole in the line-up... No point in having #2 if #1 isn't there too.

Mr. Peabody (voiced by Ty Burrell) is a business titan, inventor, scientist, Nobel Laureate, gourmand, two-time Olympic medallist, and genius... who also happens to be a dog. Using his most ingenious invention, the WABAC machine, Mr. Peabody and his adopted boy Sherman (Max Charles - The Amazing Spider-Man) hurtle back in time to experience worldchanging events first-hand and interact with some of the greatest characters of all time. But when ... more...