Diary of a Minecraft Zombie #6: Zombie Goes To Camp review 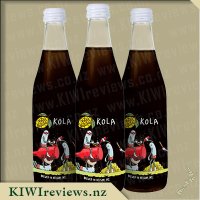 Pete's low sugar kola is made with freshly squeezed New Zealand lemons and limes, as well as NZ Heilala vanilla, which fits in with our Fair Trade at home Philosophy. Now chill, open and enjoy the best kola in the world.

Back in the day I used to be an avid soft drink drinker but after becoming a bit more health conscious and cautious of sugar content I had been put off fizzy drink. I was quite interested to review this Kola drink by Pete's Natural and I was quite intrigued by the fact that when it arrived it worked out to have a lot less sugar than your standard fizzy drink.

When I first opened the bottle I noticed there wasn't a loud fizz noise like most soda drinks. Immediately the smell hit me. It was a nice vanilla smell and it wasn't over powering but there was also a hint of lemon coming through. When I had my first sip I felt that the vanilla overpowered the drink a wee bit but the lemon helped to balance out the natural sweetness. It definitely isn't your normal tasting "cola" drink and doesn't have that huge fizz factor in your mouth that can sometimes make you cringe.

I really enjoyed this drink. The taste was nice and balanced, it wasn't too sweet as I feel that the lemon hit helped to mellow down the sweetness and balance it out. I think for a 4 pack of quality New Zealand made drinks that $14 is quite a fair price. If you were buying other glass bottle drinks from a cafe you would expect to pay close to $4.50/$5 per bottle so $14 in my eyes is reasonable. I would definitely purchase this drink in store.

I am not normally a Cola drinker but I really wanted to try this as a lower sugar option drink it sounded really nice. I do like the taste of Cola but the sugar content is far too high for me so seeing Pete's Naturals had made a Kola I really wanted to try it. I loved that it was made with lemon and lime and vanilla which are all great natural ingredients with great flavours. Being NZ sourced ingredients makes it even more exciting because I love to support NZ made.

The taste of this Kola was great it was definitely a real old fashioned Cola taste and I really enjoyed it nothing like the Coca Cola brand which is far too sweet and hurts your teeth. I likened the taste to the soda's you used to get with a less harsh fizz and a more naturally sweet taste rather than a huge added sugar content. I did share although I did not want to and my daughter said she liked it which is good as I would rather buy her a natural soft drink than a name brand drink with a huge sugar content and chemical components.

I love the new look bottles they are very appealing and picture worthy I was impressed with the packaging and will be happy to buy this Kola again in the future. Another winner by Pete's Natural for me! This Kola is a unique drop. Not 100% sure why it's spelt with a 'K', but the differences don't stop at the spelling. The first Pete's Natural beverage that I tried was the Lemon Chilli, and as the logo also incorporates a lemon, it makes sense that the use of lemon is something that is common for the brand. This Kola follows this, and has a refreshing lemon zing to it, as well as a smooth vanilla flavour. Not often that you get a cola drink with a citrus flavour added to it, and this one has both lemon and lime juice. It is quite the concoction of flavours, as the heilala vanilla that I noticed is also accompanied by a caramel flavouring. Overall, the mixture of flavours gives the beverage a brilliant aroma, like that of a fizzy cola bottle lollies.

With 7.2g of sugar per 100ml, it is lower than other fizzy drink brands (Coca-Cola has 10.6g, Pepsi has 10.9g). This makes it an option that provides less guilt, while also giving us a refreshing new adaptation to the usual drink. The mix of caramel and vanilla helps reduce acidity, and the light carbonation boosts the flavour as well.

At $14 per 4-pack, it's on the high end of beverage prices, and immediately takes it out of my list of beverages for regular consumption. The price makes it more of an occasional luxury or treat item. I was delighted to see that Pete's Natural have produced another drink in their range. I just love the bottles, but even more important, I have not yet encountered a flavour I do not like. Kola (or cola) is one of my favourite flavours, but I could not see the point of launching yet another variety on to the market - until I tasted it.

It is quite unique among colas because it has a natural lemonade base, and this lemon flavour comes through quite strongly. In fact, once I realised that it had a different flavour, I decanted some into a mug and asked a friend to give me her impressions of it without telling her what it was. She sniffed it and said she thought it was a vanilla drink. Then she tasted it and thought for a moment before telling me it was a combination of lemonade, vanilla and cola. I then showed her the bottle - and she loved that, saying the little characters reminded her of minions!

Her description was interesting because the drink does indeed contain all three of the items she identified - and lime as well. Personally, I liked it: it was refreshing and certainly different, rather like vanilla coke but with a mellower aftertaste. Both of us liked the way it does not assault your senses with too much fizz, often a problem with soft drinks. This variety is mildly fizzy but not overly so.

For me, the drink came into its own on a rare hot autumn afternoon when we were sitting in my friend's garden. Having tasted a little inside the house, and ensured that the remainder was chilled, we took the rest outside with us. It was an ideal drink for this setting, combining fresh tastes and thirst-quenching citrus. (My friend was not so keen; she thought the flavours were too strong, even after the product had been chilled, and would prefer to see one dominate the other two instead of all of them competing with one another.)

However, I like the idea of a drink that is naturally low in sugar and is free of preservatives. Vanilla counteracts the acidity of the citrus so that there is no need for lots of sugar to compensate. Many soft drinks rely on large amounts of sugar or artificial sweeteners to make them palatable, but neither is desirable as an essential ingredient. I like the idea that I am drinking something that is reasonably pure and is not going to clog up my system with junk!

When I hear the word 'Cola' or 'Kola' I automatically think of Coke or Pepsi products. So when I saw that Pete's Natural had infact released a Kola drink into their range of delicious tasting drinks I was most interested to try it, and lucky enough for me I was chosen to review this.

Like all of the bottles in the Pete's Natural drinks this one was a lot of fun to look, a tall glass bottle that was see through so that you can actually see the drink you are getting. The Kola was very dark brown, almost black in colour and surprisingly had a little bit of sediment at the bottom of it, this was quickly dissolved with a quick shake. The picture on the bottle I loves it has some cute little characters who are busy squeezing lemons and obviously working hard on creating a tasty drink. Miss 4 was most intrigued by this label and had many stories in regards to what they were doing LOL.

As I read the ingredients I was asking myself how this was going to taste like cola, so when I opened the bottle and took my first sip I was delighted it really did taste like cola... only better. I could really taste a hint of caramel but this only made the drink more delicious. the drink was carbonated, bt only lightly and this is half the reason why I really enjoyed this drink, as it didn't have an explosive fizz to it like many other cola based drinks on the market.

I love that this drink not only tasted great, but also that it contains all natural ingredients and that all the fruits it contains are grown right here in New Zealand. This drink is also lower in sugar than most cola drinks which is an added bonus! Without a doubt this is one of the best Kola's I have tried and one that I would love to try again, it would be perfect for over summer at BBQ's and at the beach.

Summer can sometimes be a bit too warm for a hot drink. So why not keep some peach iced tea pods on hand? Perfect for when family and friends pop over during the warmer months.