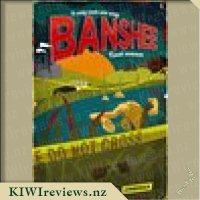 A New Challenge for Banshee PA's Crew of misfits as season 4 opens to heightened problems needing to be fixed on both sides of the Law.

New this season, Eliza Dushku (Dollhouse) hits the scene and the hunt for Jobe ensues from S3 cliffhanger finale.

Hood, Carrie, Proctor, and the gang all return for a climactic, all or nothing run taking the 'fun' in dysfunction... To the extreme.

Not as intense as previous seasons, instead more emotional. I for one am extremely sad to see it go. This is the final season ever - the cast decided to go out while still on top and finishes up all story lines beautifully. It has left a window for it to hopefully return in the future but if not it has been extremely fun, especially as it has been a Kiwi as the lead star.

The season opens with Hood having a break down of sorts and no longer the sheriff, upon finding out that Rebecca has been murdered he is the prime suspect and with Proctors assistance he goes to find the killer. No longer restraint from the PC rules he does what he does the best and thats find out answers anyway he can.

This had a complete different feel from previous seasons and had a lot of flash backs and back stories and tried to cram a lot into a short time. Only eight episodes long it covers a long distance. Camera shots could be wonky and the jumping around at times gave you whip lash but like always Banshee delivers as the ending got closer. With new bad dudes it has its share of violence and a very welcome return of Jobe gives it the light hearted entertainment I love. Sugar unfortunately took a back seat in this season so his words of wisdom where very few and far between.

I really wished Hood and Proctor had teamed up in this season as they both had the common enemy, but instead Proctor had his own agenda which was well away from Hood on many levels. I always loved there conversations and mutual understanding between the both of them.

One thing I will miss is the opening credits. The music is one of the best I have heard for a television series and its always entertaining to watch the photos popping up and on occasion moving. I only hope another show comes along like Banshee that I can really sink my teeth into. I loved this show it was never affraid to go places - like most shows are. I even enjoyed the fight scenes, and there were plenty. This is a show that people will watch in the future and kick themselves for not watching sooner - amazing in every way.

Thousands of years into Earth's future, the civilized world is no more, wiped out by a holocaust of its own making. Divided into what is known as the Four Lands, it is now a world of beauty, heroes and magic, presided over by a single family known as Shannara.

Over the centuries, descendants of the Shannara bloodline have been called upon to fight and reshape the Four Lands and the lives of its inhabitants, a mix of races ... more...