« Mark of the Thief #2: Rise of the Wolf review 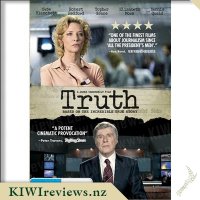 On the eve of the 2004 Presidential election, with the USA at war in both Afghanistan and Iraq, news producer Mary Mapes (Cate Blanchett) and her long-time partner, legendary news anchorman Dan Rather (Robert Redford) uncover an incendiary story. A sitting US President may have been AWOL from the United States National Guard for over a year during the Vietnam War.

Hours after the story breaks, its veracity is questioned. The ensuing scandal effectively ruins Dan Rather's career, nearly changes the course of a US Presidential election, and almost takes down CBS News in the process. In a world of WikiLeaks, phone tap scandals and cover-ups, this story of corporate media ownership and the unending privilege of power simply couldn't be more relevant.

This is a film about what happens when "little" people come up against the "heavies". It does not matter whether they are right or wrong; they have a slim chance of winning when they are daring to speak out against their superiors. It happens whether the situation is small scale, where the protesters involved are ordinary citizens dealing with a local council or the political party in power, or - as in this movie - journalists attempting to speak up in the face of possible government collusion to whitewash the reputation of one of their own. Disempowered people are naturally reluctant to speak up when they are aware of possible consequences, and will even stoop to lying in order to protect themselves.

The issue being investigated by Mary Mapes, who heads the 60 Minutes team for CBS, is that of George W. Bush and the circumstances surrounding his career advancement. Evidence points to the fact that there may have been a cover-up to change his military records so that he appears more competent and experienced than is actually the case. The film follows her efforts and those of her team to find out what really happened. The pursuit of truth is hampered by the institutional networks that close rank when threatened.

I found the characters believable and overall thought the acting was excellent. Stacy Keach particularly impressed me as one of the "little men" overwhelmed by the force of the establishment and ultimately backed into a corner. And Cate Blanchett evoked the sympathy of the audience by the way she presented her character, showing the different aspects of the highly competent working professional in contrast to her role at home with her husband and son.

There were occasions when the storyline was rather difficult to follow. It was ambitious for the director to confine a complicated political scene to a movie just two hours long and at the same time to maintain audience interest. It was almost as if he were inspired by the real life deadline faced by the CBS team who had to cut corners to present their programme on schedule. However, the movie was largely successful in conveying the feel of the situation and the urgency associated with it. It made for compelling drama; music added to the overall effect as it was cleverly matched to the mood of each scene, and, although not intrusive, did help the audience to make sense of what was happening.

I would like to see this film again; before viewing it, I had no idea that these events had taken place, and now I want to find out more! The story was based on fact so should be reasonably straightforward to research. Obviously there was some dramatic licence at play in the film to ensure dramatic continuity, but the fact that it was about real people and real events did limit the amount of fictitious content that could be included. All in all, an enjoyable and compelling two hours of entertainment that kept me riveted to my seat.