Home > Categories > Movies > Drama > The Fault in Our Stars review

ProdID: 5979 - The Fault in Our Stars
Directed by Josh Boone 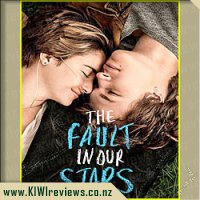 The Fault in Our Stars product reviews

Hazel and Gus are two extraordinary teenagers who share an acerbic wit, a disdain for the conventional and a love that sweeps them and us on an unforgettable journey.The relationship is all the more miraculous given that they met and fell in love at a Cancer support group. The Fault in Our Stars based upon the number-one best selling novel by John Green, explores the funny, thrilling and tragic business of being alive and in love.

This was a very hard watch for me. It has been on the hard drive since April and I haven't had the strength to watch it, to be honest still didn't but I have been dying to watch since it came out. I knew it was about cancer and I knew it was going to be sad and I knew that someone dies and I knew that I would end up crying - but my husband was out for the night and I really needed the release. I did howl and I am surprised the girls slept thru it. My dad got diagnosed with cancer in March and took his last breath in May.

The acting was so real and so brutally honest. Cancer sucks!! The raw beauty of teenagers finding their true love, the first kiss, the innocent hand holding it was all captured in this movie. You truely believed the illness was in all of those young children. I found it lost the momentum while they visited Amsterdam but once he revealed he was ill again it picked up and well lets just say there were a lot of tears. I could not watch again, not just because of the subject but mainly I just found it was a little drawn out in places.

I expected the ending to just finish since the book they were both obsessed with just did and I am content with that. I truely hope one day there is a cure and no families ever have to go thru what I did or what these families had to endure. A movie that definitely touches a nerve and I am glad I have finally seen it.

Shailene Woodley does an amazing job at portraying Hazel Grace, she was genuine and sincere. Ansel Elgort was the perfect choice for Gus's character also. Their relationship came across very real, raw and loving. They did a fantastic job!

After reading the book I was somewhat sceptical about watching the film as they often let the book down but in this case I was not disappointed. All the touching and moving parts from the novel were included in the film. Including all the unforgettable quotes, such as "I fell in love the way you fall asleep: slowly and then all at once" I think many of the quotes would look fantastic printed and used as wall art. There are many and all just as meaningful as the last!

Everyone recommends tissues and I must admit they wont go amiss BUT in saying that the movie is filled with love, warmth and plenty of humor also, it is not all doom, gloom and tears! For me the best part was Hazel and Gus's loyalty and love for each other. Their relationship spelled out how it should be, the perfect relationship in many ways.

I believe The Fault in Our Stars is an eye opener to Cancer and the tribulations many suffer. Great Movie!