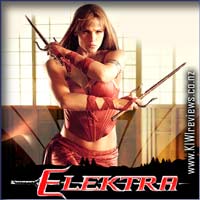 Tortured by her past and haunted by her own mysterious death, Elektra finds herself resurrected. Although her sensei has trained her well in the strict discipline of ninjutsu, he cannot begin to tame her burning rage over the brutal murder of her parents. Elektra's need to avenge this untenable crime forces her into exile. She becomes an assassin - the best in the business - but for a woman like Elektra, killing is no way to make a living.

To save herself, Elektra needs something more than a reason to kill... she needs a reason to live. She finds it in the form of her latest target, Abby, a feisty 13 year old in whom Elektra sees so much of herself, and Abby's father, Mark. In her desperate struggle to save them, Elektra finds something she did not even know she was looking for: Redemption.

This film was not very likeable. While Elektra was the best thing from the flop that was the Daredevil movie, Jennifer Garner wasn't able to make this film a winner. I had some reasonable hopes for this film, as Jennifer Garner has convincingly done similar espionage, martial arts roles within her casting on the television show, Alias. But the film attempted too much.

Following on from the Daredevil film, the film attempts to portray the inner conflicts that lead to her death in the previous movie, whilst fixing all of her problems, battling an elite group that has existed for generations, and have her find a love interest, all while providing exposition into her past. It becomes overwhelming and conflicting, and overall ruins the enjoyment of the film.

The film has a comic book feel to it, incorporating a very sepia tone with warm read and brown hues. Not has great a graphic feel as the blue tones of the 'Underworld' franchise, or the black and white feel to such films as 'The Spirit' and 'Sin City'. Overall, this was clearly one of the first stand-alone Marvel films, and despite it being difficult to watch, I to have to admire how much Marvel have learnt from this film, when you look at the caliber of film that is currently being released.

Having recovered from the fatal injuries inflicted upon her due to her involvement in the film Daredevil, Elektra has become an assassin for hire, embittered by her life and living only for her next job.

When Kirigi and the Order of the Hand present her with her next job she takes it and heads out to kill Mark Miller, a man who must die to account for an act committed by his grandfather years before his birth. However when she actually meets Mark and his young daughter, Elektra has a change of heart and joins the Millers to defend them from the Order. Having seen my fair share of films I rarely find one that is totally without value, so often I'll give things a try even if I fear the worst.

With such a thin frame to work within, Garner does nothing that looks determined or, as she "finds her heart again", simpers and weeps for the camera. She cannot walk properly because someone has decided that "strutting" makes a woman look sexier and she has no presence at all. The direction is just as bad as the acting; the action scenes are terrible and, outside of these the film has no idea what to do and thus just rushes to the next poor action scene, loaded with poor special effects throughout.

Overall this is a pretty terrible film that has nothing of value within it and I won't be watching it again.

'Yay!' I said when I saw this movie was coming to the local cineplex. More chances to see Jennifer Garner strut her stuff and kick some tail. I wasn't disappointed.

I was mesmerised by the action on the screen and tried to find the editing between live-action and CG Images. I couldn't tell the difference myself, it was that well done.

The acting, however, tended to hover dangerously between believable and over-the-top.

Despite that small gripe, I thoroughly enjoyed this flick and will be adding it to my collection as soon as it becomes available.

After the moderately so-so movie Daredevil, and riding the current wave of "We can't dream up any new stuff, so let's make movies out of other big comic heros", we have another spin-off attempt to grab some cash.

With a totally pathetic storyline, some extremely mediocre acting from some otherwise excellent actors and actresses, and some stunning special effects, this movie had to be bordering on a waste of money! If I had paid any more for the ticket than the severely discounted $3.50 that I handed over, I would have walked out demanding money back.

Overall, this would be a great movie to go and see when you are so blind drunk that a babe in a tight red outfit is more than enough entertainment, otherwise you'll be getting bored well before the half-way mark. It was an utter disappointment.