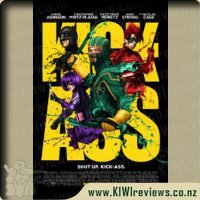 Average teenager Dave Lizewski (Aaron Johnson) decides to take his obsession with comic books as inspiration to become a real-life superhero. As any good superhero would, he chooses a new name, Kick-Ass, assembles a suit and mask to wear, and gets to work fighting crime. There's only one problem - Kick-Ass has absolutely no superpowers.

His life is forever changed as he inspires a sub-culture of copy cats, meets up with a pair of crazed vigilantes - an eleven year old sword-wielding dynamo, Hit Girl (Chloë Moretz), and her father Big Daddy (Nicolas Cage) - and forges a friendship with another fledging superhero, Red Mist (Chris Mintz-Plasse). But thanks to the scheming of a local mob boss Frank D'Amico (Mark Strong), that new alliance will be put to the test.

This has always been a curious point for me. How many superheroes are there? And what happens to the useless ones?

I'm sure everyone at some point in time has thought about becoming a crimefighter like Batman, or Spiderman, Superman, or even the Hulk, but many of us lack that radioactive kick, that a cash injection, gamma exposure, or extra terrestrial edge. So what happens if you try it anyway?

Simple answer? You get your arse kicked. Hard.
And that is what you will find in this movie. An answer to any questions you have had regarding becoming a vigilante. Your 'How-to' guide to beating up the bad guys and hopefully avoid hospital visits. A comedic, yet dark look into becoming a hero. The issues of body image, reputation, and even the hazards of social networking are looked at in this hilarious series of escapades. Kick Ass's greatest asset is his fellow crime fighters, who help him out when the time is right.

But most importantly, this film is pretty damn honest. It highlights the problems with vigilante justice, showing the gruesome consequences that can become of it. Because the last thing we need is a bunch of teenagers trying to take on armed criminals.

Kick Ass is a dark, bloody film for a comedy, but it is invigorating in its approach.

"I always wondered why nobody did it before me" and thus Kick-Ass begins.

Superheroes are always a big hit and Kick-Ass takes the idea of superheroes and gives it a bit of a twist. Dave decides that he could be a superheroes and once he has bought a suit hits the streets however things don't go quite as planned. Thanks to medical science though he ends up with a slightly tougher body structure and his the streets again. Te games of cat and mouse are well done and you get to see not only the villains and the 'heroes'.

There is humour and action galore in here, from the very sassy Hit Girl and her father (who has been trainer her to be a great fighter since she was a toddler) to Dave, to the local bad guys. There is an inventive death in here, if you're squeamish then you may need to close your eyes when they are in the warehouse. Everything flows together really well however, and there is a great, even, mixture of both comedy and action that includes an RPG, various guns, knives and other weapons, was a good mix leaving both my husband and I to enjoy the movie.

I really enjoyed Kick-Ass and will watch it again for sure.