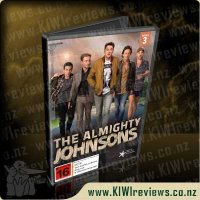 The Almighty Johnsons is a comedy-drama series about four brothers who just happen to be descended from Norse Gods. Each of the Johnson boys has his own God-like power; it's just that their powers aren't all that powerful. The Johnsons are typical Kiwi blokes who don't much like to stand out from the crowd. And everyday gods have everyday struggles - striving to love stroppy women, overcoming sibling rivalry and fulfilling your God-like destiny, all while still finding the time to enjoy a few beers with your mates.

In Season 3 the boys are trying to regroup from the false Frigg chase of Season 2 and to reclaim their lives in the 'real' world. The universe might have other ideas but right now Axl has a new quest, to lead a 'normal' life.

I hadn't seen any of the other series so initially thought I was in for a rough ride trying to catch up with the characters and story. However, it was quite easy to pick up the storyline which follows the Johnson brothers who are descendants of the Norse Gods and living in mortal form on earth with some God-like powers. The series continues with their quest to find "the Frigg" but also has several other plots and stories intertwined along the way. It's such an original storyline based on Norse mythology that the series feels so different and original.

There are plenty of laughs, the characters are terrific and all the actors seem to really have fun playing their roles. I'd be hard pressed to pick a favourite. There is a lot of bed-hopping and swapping, some drugs (usually involving grandpa and weed) and a bit of swearing and drinking but nothing too offensive and mostly done in an entertaining way. It's also refreshing to see a series totally base in New Zealand, even including a road trip to Norsewood!

The DVD set is great value, 3 discs and a approximately 624 minutes run time, which is quite a few evenings viewing and you won't be left feeling disappointed at the end. Well recommended.

I have seen bits and pieces of episodes of this on TV and thought it would be great to watch a complete episode one day so when it came up as a prize on KIWIreviews I thought that someone has to win so give it a go. I was really excited when I got the email saying please claim your prize.

I put the first DVD in the player and sat back, not sure what to expect but found it was really funny with a bit of the usual bad language. The warning sticker said that there was sex scenes and there was rather a lot but not that you get too see too much, a lot is left to your imagination. The actors were good, not sure how they did some of the scenes without laughing, the special effects were great, it really looked like Loki was farting fire.

The main story was easy to follow, I guess that in the first two series you learn about the quest to find Frigg and now it follows a bit more. Some parts were predictable but there was a lot that wasn't. I don't follow a lot of the Norse gods or other gods but still the story was easy to follow and understand why they were doing things in a certain way.

I have to find and watch seasons one and two now. Good to see kiwis doing well.

The Almighty Johnsons was quickly one of my favourite New Zealand television shows of all time. The premise is totally original and for me, really interesting. I studied the ancient Greeks and Romans and had a special interest in their religions at University, so I loved having this introduction into the Norse Gods and Goddesses as well. After season two, there was talk of the show being canned and I was one of the thousands of Kiwis who got behind the producers and fought for the show to continue.

Season three is therefore our prize and I was very keen to watch it. Like the other seasons, it is well written, and has a great local cast who have all done the hard-yards either on TV, in film or treading the boards. Season three sees us return to the Goddess ceremony and see once again, Gaia receive her Goddess. Unfortunately, not the one we all hoped she would receive. So its fair to say that a large portion of the season is taken up with Axl's coming to terms with this.

On top of that, there are strings to tie up which lead to a new group of characters and more sub-plots. Then even more new characters and new mysteries. This season really rounded out some of the more two dimensional characters, and I really enjoyed seeing this, especially with the Goddesses. Zeb seems more grown up, but in some ways losses his shine because of it. Though I suppose we all have to grow up eventually.

It has it's usual mix of swearing, drinking, God-business, crazy Colin to deal with and brotherly love? It is quite blokey, but I guess that's all part of it's charm. I would definitely purchase this given the opportunity and I plan to buy season one and two as well in order to own the set. It is just that good a show, it deserves a place on my shelf and we don't tend to buy things unless they are awesome.

What does it mean to be human? What happens when technology has advanced to the point where it begins to truly take over our lives, affecting our relationships? Humans is a thrilling new eight-part drama, from the makers of Broadchurch and Utopia set in a parallel present where the latest must-have gadget for any busy family is a 'Synth' - a highly-developed robotic servant eerily similar in appearance to humans. These incredible ... more...