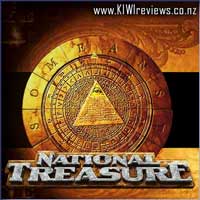 I love a good treasure hunt book or movie and so when my mum and I say the trailer for National Treasure we both agreed that it was one that we needed to watch. I wasn't too keen on Nicholas Cage but given that the rest of the film looked like fun I figured I could try and get past Cage, especially when I wasn't paying for the ticket... :P Everyone in Ben's family has spent their life trying to track down the biggest treasure in the world, all except for his father that is, but Ben still searches forthe treasure making great leaps and bounds in but a few days.

There are some great action moments involving chase scenes and even an explosion or two, there is some espionage as they steal some rather valuable items and naturally the FBI get invloved (after all you can't steal the Declaration of Independance and expect to not gain any attention from the authorities). The special effects aren't many until the end, there's a great cave system that is done wonderfully and the final reveal scene as they finally get to the end of their quest... stunning, specailly on the big screen, though just as great on the small screen. A fun adventure film that takes you on a great ride.

I haven't always been a fan of Nicolas Cage as an actor, but he did a good job in this movie. The use of the different codes and cyphers throughout the film had me hooked early on. Yes, there seems to be a definite direction that hollywood has taken with the whole secret society and codes galore stuff, but I really dig all that so bring it on.

The special effects could have easily overpowered the story but I felt they complimented and added a certain depth to certain sequences. I have had an interest in history for a number of years so the inclusion of this into the storyline made it all the more watchable for me.

In all, a brilliant movie which I am glad to have been able to add to my ever increasing collection.

This was a ridiculously watchable movie. Nicholas Cage is often a good watch, and added to a really interesting plotline and some quirky characters it makes for some great viewing.
The whole premise of course cashes in on the current 'obsession' with the Templar Knights, Masonic Lodges and all that stuff stirred up by Dan Brown's 'The Da Vinci Code' but it does take it in a different direction. More like Indiana Jones than anything else, the movie runs through quite quickly, and the only thing that really bothered me was that it was over before I wanted it to be.
Highlights would have to be character based - Gates' strange but sassy sidekick has some of the best one liners in the movie, and Sean Bean just gets better and better...
Special efects are really quite well done and believeable.
This movie should appeal to most, and educates you a bit while you're at it... who could complain about that?

After an early passing interest in the Illuminati Conspiracy many years ago, and more recently reading The Da Vinci Code, I have enjoyed the idea of multi-part, multilevel cyphers. You just have to admire a cryptic encoding system that can survive hundreds of years, with a requirement for a very broad range of history, science, general knowledge and physical prowess.

I was familiar with the Templar's Treasure legend, the starting point of The Da Vinci Code, National Treasure, and their poor cousin Revelation, so this movie at least had some appeal already. Thankfully, I found it to be a really gripping tale, the hybrid child of 'Indiana Jones and the Last Crusade' and 'Cryptic Crossword with Attitude'...

Overall, with some brilliant special effects, and some really innovative twists on the original legend, I thought this was a brilliant movie, leaving other wannabe's such as Tomb Raider 2 for dead.

Gathered together by the mutant telepath Professor Charles Xavier in hopes of bridging the gap between mutants and mankind, the X-Men have been trained to ... more...