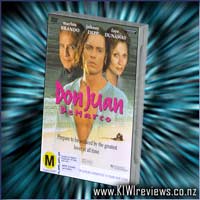 Disclosure StatementFULL DISCLOSURE: A number of units of this product have, at some time, been supplied to KIWIreviews by the company for the purposes of unbiased, independent reviews. No fee was accepted by KIWIreviews or the reviewers themselves - these are genuine, unpaid consumer reviews.
Available:
11th November 2004

A young man (who is the legendary Don Juan?), comes to New York in search of his lost love. Feeling like he has nothing to live for, he attempts to commit suicide from atop a billboard. Dr. Mickler, (played by Marlon Brando), is a soon retiring psychiatrist who helps Don Juan (Johnny Depp), come to his senses.

He brings the costumed boy to the psychiatric hospital, in hopes of helping Don Juan find his identity. The doctor works with him for ten days, in which Don tells his life story. Mickler begins to believe that the young man is truly Don Juan, but the rest of the staff don't agree.

The doctor knows that the only way out for Don Juan, is to pretend he's an average boy whose fantasy got the best of him.

This seemed like a good choice to watch when it first came out on DVD with my then boyfriend and my cousin (the guys choose the movie) but the only one who stayed awake long enough to watch more than the first few minutes was my cousin. I kind of watched long enough to think that this was going to be a very long movie but I was willing to watch. I got woken up by my cousin telling me the movie was finished and I would probably be a lot more comfortable in bed instead of cuddled up with my boyfriend.

The plan was to try and watch it the next day instead but we all decided it was probably not a movie we wanted to see and my cousin didn't want to be tortured with the movie again.

I'm a big Johnny Depp fan so this movie was a total disappointment.

With a good selection of famous names, I thought it would be worth a view. Wow. I see Marlon Brando still alive and kicking, Faye Dunnaway still trying to "...convince [her] body it's still 23..." and doing a surprising job of it... mixed with Johnny Depp, playing another swashbuckling character similar in determination, but otherwise totally different to his Captain Jack Sparrow in Pirates of the Caribbean.

With moments of real thought-provoking introspection that make you question your own life and ethics, the movie was actually pretty much of a similar 'texture'... kinda mushy even for a romantic drama.

The soundtrack, despite being very quiet most of the way through, has some wonderful songs scattered around. I would not doubt that the soundtrack alone would be useful to anyone wishing to woo a kindred romantic spirit. :)

Overall, It had it's moments, but wasn't the best it could be. With Johnny's pseudo-spanish accent, Marlon's mumblings, and not much else... frankly, this one is a keeper simply for the swordplay, and in case of company who can't/won't watch action or sci-fi...

During a fierce thunderstorm in rural Kentucky, a young zebra is accidentally left behind by a travelling circus. He is found by a former champion horse trainer, Noal Walsh and 'Stripes' is quickly adopted as a favourite pet by his daughter, Channing. Now 'Stripes' may not look like the other horses galloping across the fields, but he thinks he is no different and longs to race with all the thoroughbreds. So does Channing and, with some ... more...