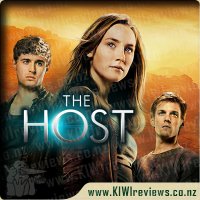 Disclosure StatementFULL DISCLOSURE: A number of units of this product have, at some time, been supplied to KIWIreviews by the company for the purposes of unbiased, independent reviews. No fee was accepted by KIWIreviews or the reviewers themselves - these are genuine, unpaid consumer reviews.
Available:
in cinemas from 28th March 2013

What if everything you love was taken from you in the blink of an eye? "The Host" is the next epic love story from the creator of the "Twilight Saga," worldwide bestselling author, Stephenie Meyer.

When an unseen enemy threatens mankind by taking over their bodies and erasing their memories, Melanie Stryder will risk everything to protect the people she cares most about - Jared, Ian, her brother Jamie and her Uncle Jeb, proving that love can conquer all in a dangerous new world.

I am a huge fan of Andrew Niccol's work, even before I knew who he was, I was a fan of his movies... S1m0ne, The Truman Show, Gattaca, In Time... loved them all utterly, mostly because I was aware of, and really appreciated, the underlying stories. But... when I discovered he had worked on the script for this one - based on a romance novel by the author of the Twilight Saga - well, frankly I was baffled as to what to expect.

Niccol has a great track record of taking social issues and framing them as sci-fI stories, giving us a semi-comfortable way to think about things we don't really want to think about. This time though, he wasn't writing a story, only a screenplay, so by definition he didn't have anywhere near as much leeway. Still, I was very impressed with what he managed to pull off.

If you can accept the pretence of an alien race able to infest and totally control a human - or "Host" - then you're probably a fan of Stargate, or should be. What made this a very "Stephenie Meyer" story was the almost trademarked "2 guys, 1 girl", with a twist... throw in an asexual alien parasite and you have "Twilight+". Where was the amazing social commentary from Niccol? His touch was in the Seeker chasing our wayward Wanderer. She had a dark secret of her own, hinted at throughout, revealed at the end.

So, what was the "Niccol Message"? That's a tough one to pin down. I suspect only he could answer that fully, and each viewer will have a slightly different perspective. For me, the message seemed to be one I have heard many time, seen a lot of, and always have to be aware of: "What you dislike the most in others, is often what you dislike most about yourself." How that applies to this... I leave for you to discover. Maybe you'll find a different message, maybe you won't.

Overall, I was very pleasantly surprised by this movie - though I didn't have any definite preconceptions about it, I was expecting something soppy, pointlessly over-melodramatic, and frankly far more of a chic-flick than the movie that unrolled in front of me. Yes, it's got romance and an overly-emotive plot - look who wrote the original story, after all - but it also had something going for it outside of that genre. The special effects were light - it wasn't a CGI fireworks spectacular - subtle, well developed and easily overlooked in favour of a more plot-driven movie. Not a family movie by any means, but certainly one it would be safe for couples to go and see. ;)