ProdID: 40 - Pirates of the Caribbean
Directed by Gore Verbinski 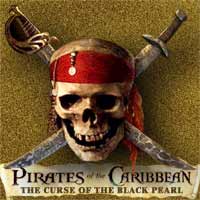 Disclosure StatementFULL DISCLOSURE: A number of units of this product have, at some time, been supplied to KIWIreviews by the company for the purposes of unbiased, independent reviews. No fee was accepted by KIWIreviews or the reviewers themselves - these are genuine, unpaid consumer reviews.
Available:
now showing

Pirates of the Caribbean product reviews

"Me? I'm dishonest, and a dishonest man you can always trust to be dishonest. Honestly. It's the honest ones you want to watch out for, because you can never predict when they're going to do something incredibly... stupid." I love Captain Jack Sparrow and some of his lines are great fun, in fact, if it wasn't for Sparrow I don't think I would have liked the movie at all as Knightly was irritating and so was Bloom, but Rush was also pretty awesome in his role.

The special effects in this movie were rather well done and the pirate skeletons walking underwater.... that was one neat scene. Johnny Depp provides the most entertainment throughout the entire movie with his flamboyant, looks like he is perpetually drunk Jack Sparrow who half the time doesn't even make much sense to everyone around him. Rush does a great job as Sparrow's nemesis Barbossa, him and that apple and I love the monkey, I think it annoys Sparrow more than Barbossa does. The music is fantastic, that next to Jack Sparrow is a favorite of this film and I love how the one piece ties through all the films in the series.

This is a fun adventure and if you like pirate films then it is a good one to watch.

Johnny Depp truly plays eccentric roles well. And with a star studded cast, he has to act well to remain noticed, but that is exactly what he does.

This film starts of well, with a lot of pirates, and a lot of action. Brilliantly shot, I enjoyed this film immensely. I honestly didn't care too much for the plot; it was rather convoluted and quickly became supernatural. Unfortunately, 'supernatural' leads to extensive use of computer generated images, and makes the film less enjoyable. But Captain Jack Sparrow (Johnny Depp) make up for it all with his eccentric behaviour, and witty remarks. His playfulness and narcissism steals the show.

Far more comedy than action, both pirate crews (minus the computer generated effects) do a great job keeping the humour going in the absence of Jack Sparrow. With Orlando Bloom playing the straight, boring lead, and Keira Knightley playing the helpless woman (someone had to say it), we find that this movies success relies on Johnny Depp being the comedic relief.

Why they thought this would pan into a great franchise? I couldn't tell you. Why has it been hugely successful? I still couldn't answer that. But with a fifth movie in the works, clearly it appeals to a lot of people.

With a cast of faces we will all recognise, this movie was the highlight of my viewing week. With action, comedy, twisted plots, hairpin turns in action flow, double-crosses that become triple-crosses, pirates and maidens... it is all here for one and all.

Best quote: You had better start believing in ghost stories, because you are in one.

Best scene: Dem Bones and their Swords (You have to see it to get that reference.)

Overall, I plan to go back and see this one again! Well worth full price.

At the start of his second year of his amazing journey into the world of wizardry, cars fly, trees fight back and a mysterious elf comes to warn Harry Potter at the start of the second year. This year at Hogwarts, spiders talk, letters scold and Harry's own unsettling ability to speak to snakes turns his friends against him. From duelling clubs to rogue Bludgers, it's a year of adventure and danger when bloody writing on a wall ... more...