ProdID: 3960 - The Wiggles Taking Off
Type of Show: Children's Music 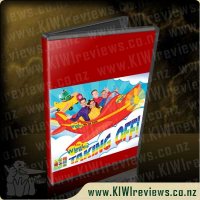 The Wiggles Taking Off product reviews

We are huge fans of The Wiggles and we all agreed that their new Taking Off DVD can be summed up with one word: Different. This is the first DVD since Greg, Murray and Jeff retired and three new Wiggles took their place. I was talking to some friends about this DVD and they commented that in a few years the pre-schoolers won't think it is strange because this line up will be The Wiggles to them.

Before we watched the DVD I explained to my daughters (3 and 4.5) about the change in Wiggles. They seemed to accept it because they knew that both Greg and Sam had been The Yellow Wiggle. Not once while watching it did they comment about there being different Wiggles. Anthony is still The Blue Wiggle and Captain Feathersword is still Paul Paddick, Wags and Henry are still in the DVD. Dorothy is there, but not as much as she usually is, perhaps because they now have another female so Dorothy doesn't need to there every time they need a woman. I was really pleased to see Jeff Fatt appearing in the DVD playing the keyboard and as an extra. (He looks really great with the longer hair.)

Emma is the new Yellow Wiggle. They don't hide that she is a female, quite the opposite. She has a bow in her hair (and a song about it too), and on her shoes and a black rock and roll style skirt. She obviously has a dancing background as in a couple of the songs she performs ballet. She isn't the lead singer like the previous Yellow Wiggles but shares it with Anthony and Simon.

Simon the new Red Wiggle has a great singing voice and looks like he has been doing the part for years. He is a being older like Anthony he balances out the group with the two younger ones. Lachy, the new Purple Wiggle seems to be much quieter than the others, but perhaps he is just getting used to his new role.

The songs are mainly new ones with a couple of old favourite thrown in for good measure. One that I really liked was about wearing your spectacles called I've got my glasses on. It is a fun song that encourages children to wear their glasses. Emma and Simon both have songs about them, Simon actually has two, but Lachy doesn't any.

The Wiggles sound hasn't changed as much as I thought it would although I did find some of my old favourites just didn't sit right with me. The DVD was much better than what I thought and the girls loved it. They were even singing some of the songs one it was finished.

Score: 9.8
Product reviews for listing 2203: The Sky at Night : Apollo 11, A Night to Remember -  Type of Show: Historical Documentary

In a pioneering speech on May 25th 1961, President John F. Kennedy pledged that America would land a man on the moon before the end of the decade.

The pledge was fulfilled when Apollo 11 manned by Neil Armstrong. Buzz Aldrin and Michael Collins successfully completed its mission in July 1969. This special Sky at Night film, introduced by Sir Patrick Moore, pays tribute to this phenomenal undertaking and celebrates what has been ... more...