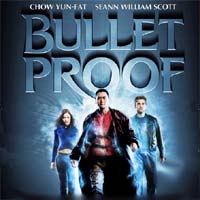 For 60 years a mysterious monk with no name has zigzagged the globe to protect an ancient scroll - a scroll that holds the key to unlimited power. Now the Monk must look for a new scrollkeeper. Kar is an unlikely candidate, a streetwise young man whose only interest is himself. But when he inadvertently saves the Bulletproof Monk from capture, the two become partners in a scheme to save the world from the scrolls most avid pursuer.

I love a movie that has good Kung Fu in it. Along with comedy it's always a good mix for me.
The basic storyline was predictable, but it's still a decent movie. There were a couple of bits where it felt like it was a push to give you an answer or a reason, and the traitor seemed very 2D, like he was just thrown in as an after thought and to tell you how the bad guys found our good guys.
Kar at times seemed to be too egotistical, Monk a bit cliched and Bad Girl too 'bad'. But still not too bad a movie, and one that has found it's way into our DVD collection.

Well, after all the hype the publicity company put out about this movie, I was expecting something a little more... solid.

With signature fight scenes clearly screaming JOHN WOO, a weak storyline, shoddy scene wipes, and some seriously un-appealing plot twists (all highly predictable) the ONLY saving grace this movie had was that it still had seating on a cheap night.

OK, it did have another saving grace, it had some funny one-liners delivered with weak style by Chow Yun-Fat and Seann William Scott in their little one-to-one conversations. The fight scenes were truely beyond even the implausible style John Woo displayed in Romeo Must Die, however at least this time they were not so visibly stilted and jerky, due in a major part I would assume to a dramatic improvement in CGI technology.

Overall, this movie was not really worth paying full price for, but if you really want to see it, wait until a cheap night at the movies or video store.

Take a trip down the aisle you'll never forget

Academy Award winner Meryl Streep leads the cast of 'Mamma Mia!', the screen version of the worldwide stage musical phenomenon featuring the songs of ABBA. Streep stars as Donna, the mother to Sophie, who's on a quest to discover the identity of her father on the eve of ... more...