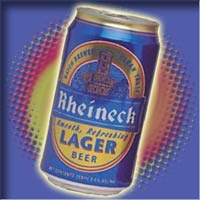 Price:
varies
Available:
You'll have to look for this one.

Contains approx 0.9 standard drinks per 330ml bottle or can.
3.5% alcohol by volume.

Rheineck. Where to start with Rheineck. Overall this isn't a bad brew. In my eyes, it doesn't quite have the distinction of craft beers, but it does fit alongside the other mass produced beers, such as Lion Red, Export Gold, and Tui. A rather light beer, it does leave you feeling full, but it doesn't go as far as to properly bloat you.

I found the flavour to be bland, and not the most exciting drink choice. While the cheap price tag does make them seem more appealing, I certainly don't really think I'll be drinking them again. I put Rheineck in a similar category as Double Brown, which will be a brewed beverage that I would buy, not for general consumption, but for either use in cooking, or in certain alcohol based games that involve a table, ping pong ball, and several tall plastic cups.

As I said at the start, it isn't a bad brew, so I certainly wouldn't say no if it was offered, but I was to spend money on it, It would low on the list of choices. I am more of a glass bottle drinker anyway. The taste of the metallic can, just doesn't cut it for me.

I am a typical kiwi bloke and do enjoy a beer but this brew didnt really hit the the spot . I did try it really chilled as i like my beer even then i didnt like it that much so taste wise i dont rate it . Price , well thats why i brought it as it was on special and was the only reason for my purchase as the appeal wasnt that flash either . As far as my personal choice goes it will have to be alot cheaper for my taste buds to change so it move up my personal list , before i would look at another purchase or even recommend it to a mate sorry .

I am not much of a beer drinker, but I am quite fond of this brew.

Discovered during a really skint patch of my life, and was told I was hosting a gathering and was required to supply beer. (I had a very pushy flatmate, and I was a sucker back then.) So, off to Pak'n'Save and look for the cheapest beer I could find. These were on sale in boxes of 2doz 330ml bottles for a mere $6.99 on special.

8 boxes balanced on a nifty-50 scooter, and I was SOOOOO glad I lived less than 200m away! :) Got them home intact, the party went OK, but everyone bitched about the booze... until they drank some. Most were impressed, some still bitched so got booted off to the pub.

Well, that was the start of my love affair with Rheineck Beer. And now, after 8 years, it is still the only beer I can sit back and quietly slug away at all night without feeling like death warmed over the next morning.

Overall, if you are partial to light ales, you'll find this one to be a great, affordable cupboard stocker. I always keep a spare dozen or 2 in the pantry for sudden company.

Try the Raspberry and Lemon Drop-infused vodka for a burst of sweet berry taste with a pleasant lemon bite.