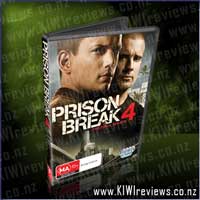 Go deep inside this spectacular final season of PRISON BREAK with revealing special features, including an exclusive extended cut of the thrilling series finale!

In order to destroy the sinister orginisation known as the Company, Michael Scofield (Wentworth Miller) and his brother Lincoln (Dominic Purcell) must elude a murderous assassin and uncover the deadly secret behind the mysterious Scylla device.

Lives are shattered and tension mounts, building toward a stunning conclusion as Michael and Lincoln fight to stay alive until the day when they can stop running - forever.

What a disappointment. Season 1 of Prison Break had me hooked and on the edge of my seat with every single episode... but each season has been worse than the last, so it was with much trepidation that I began watching the 4th, and final, season of what COULD have been a really impressive series. Predictable is the word that springs to mind with the first half of this last season... predictable and long winded. Could they have put any more twists and turns in there? It got to the point where my head hurt with just trying to keep track of all the double/triple/quadruple etc crosses going on. Knowing who was on who's side seemed to be the main "game" going on here... all for the sake of trying to get hold of this strange little black box, known as Scylla. Ok, there was still plenty to keep my interest intact.. enough carrots dangled to want to keep following, even though sometimes I think my main reason for continuing to watch was more to see just how many more ways they could twist this already rather tangled mess!
The second half definitely proved more interesting, with unexpected reappearances by characters who had long ago left, the odd surprising revelation or two, and a bit more control over the storyline that seemed to have dragged its heels for a good while. However, even here there was still the occasional touch of predictibility... ah well, good chance to go make another cuppa I suppose. In season 1, you needed to keep watching in case you missed a crucial clue to Scofield's main plan, but that was not the case in this final season, as half the time even Michael didn't seem to know what he was doing. This definitely put a dampener on things as I had loved watching the way Michael's mind worked in the earlier seasons, but this time he seemed to be stumbling his way through, until he's pushed to breaking point and loses that strongly confident calm he always carried with him. Yes, the reason for that is discovered during this season... but still, it was definitely a let down. In general though, most of the characters stayed true to form, although T-Bag did have a couple of brief moments where he actually seemed to be NICE, instead of the slimy li'l sleeze that he usually is. Thanks to Prison Break, Robert Knepper has become an actor I have learned to keep an eye out for, as despite playing some rather nasty characters, he plays them extremely well! Amaury Nolasco is another actor I've come to enjoy thanks to this series, in his role as the gentle, loyal Fernando Sucre.
Despite the disappointments though, Prison Break is definitely worth watching, especially if you enjoy: puzzles, programs that make you think or surprise you, a plot with many twists and turns and double crosses, or chase scenes (plenty of those in this season!!), and if you have watched the previous seasons, then the 4th and final season is a must see, as it ties things up nicely. However, I would suggest leaving off the "bonus disc" with the movie length conclusion to the story, as I found it a complete waste of disc space. With the extended cut of the final episode "Killing your number" already showing what happens to the remaining characters when all the running is done with, the movie was totally unnecessary and just seemed an excuse to drag things out a little longer and for yet ANOTHER jail break, with any surprises that may have been in the movie are spoiled by the last section of the final episode of the series.
An ok series with a lot of potential that it failed to live up to... glad it's finally over.

Superstar disc-jockey Juan Vesuvius brings his turntables to Auckland to deliver the greatest and strangest DJ set you've ever experienced.

Explore the history of dance music with a bona fide musical legend. But why does he need so much towelling? And what really happened between him and David Guetta? Vesuvius is an eruption that cannot be plugged.

The hit show of the 2017 Edinburgh Fringe arrives in Auckland this May ... more...