« Children of the Dog Star review 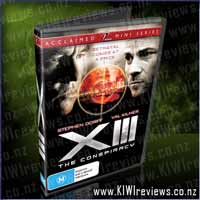 The first female President of the United States is assassinated by a sniper. Three months later, a wounded man is found with no memory of his identity. The only clue is a tattoo on his neck - XIII.

Could his lightning fast reflexes and killer instinct betray him as the assassin the US is desperately searching for?

Submerged in a far-reaching conspiracy which threatens to overthrow the entire government, XIII's identity becomes the key to unravelling a complex and dangerous truth.

From the first bullet, this gripping action thriller will leave you gasping for breath. Based on the cult comic book series and video game.

With definite flavours of "Hitman" meets "The Bourne Identity", with a pinch of "Enemy of the State" thrown in for flavour, this movie adaptation of a FPS video game has some top-line talent. Val Kilmer and Stephen Dorff are two of my favourite 'action' actors and if there had been a way to shoehorn Timothy Oliphant in here too it would have hit the trifecta, but then it would have seemed like a confusing sequel to Hitman.

The movie opens with plenty of action, and it stays at a good high pitch throughout, which not only serves to keep things interesting but also reinforces the sense of urgency just around every corner. Split into two parts, this could easily have been designed as a miniseries, since each 'episode' is around 100 minutes... which expands out well to a 2 1/2 hr movie when you slot in adverts.

Also clear from watching, this is designed to be the first in a series on a larger scale, with a cliff-hanger revelation right at the end that makes it very clear that things are far from resolved and over, and that another action-packed installment could be just a rubber-approval-stamp away.

Overall, though fans of this genre may experience numerous bouts of deja vu, this movie is quite a good one if taken on it's own merits. Though I have never played, nor even heard of, the original video game prior to this, I have been told that the movie does a pretty good job of the conversion, though naturally there are some issues where they just didn't quite get it right. Crossing media, there's always a little something lost in the translation.