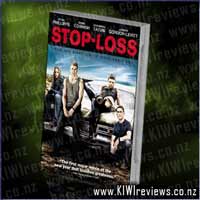 Ryan Phillippe leads an all-star cast in Stop-Loss, the inspirational film about family, friends, loyalty and camaraderie. After completing his tour of duty, Brandon King (Phillippe) faces an unexpected new challenge that will put him at odds with former soldiers, and test the bonds with old friends.

While this movie has a really good cast, music, screen shots and special effects, I thought it was missing something. I recognized a few of the leading men in this from other movies, which surprised me because I don't remember names well, I work mostly on faces.

I have seen numerous war films and although I have never heard the term "stop loss," I knew the process. The fact that most of the guys who came back from the war were suffering from hallucinations and thinking that they were still in the war, didn't surprise me. Being given a stop loss order is one of the worst things for a soldier and his family. When you are in the war, your team mates become your family.

I kept getting lost and distracted with this movie and although I would watch it again and give it another go, I don't think the result of this would change. I did find myself singing along to the music that was played and really seemed to fit with the part of the movie it was played in.

I believe that the story line could have been better but didn't entirely bottom out. Generally, what they showed was what you get in this kind of situation. I was completely lost however at the end as to whether Brandon went back to the army or whether it was a flash back to the first time.

I was enthralled with this movie. It is the first war movie I have seen of this kind. I have never seen a war movie which is based around trying to get out of the Military.

Ryan Phillippe definately was the star of the show for me. His character showed strength, courage and humility. I was deeply shocked when I saw this movie as I had no idea there was such a process called "stop-loss". When you try to get out of the Military, and you are sent back on tour, and if you disobey, it's classed as desertion.

Once back from from his tour, Phillippe and his colleagues return to find themselves in a state of shock, and most suffer from Post-Traumatic-Stress syndrome. One guy thinks he's still on tour and becomes robo-soldier, another one abuses his wife. As Phillppe tries to confront his demons by getting out of the force, he is then forced to go back.....

I was actually really disgusted knowing there is such a system around, however I guess the Military obviously have their reasons.

I definately enjoyed the movie, and will be watching it again soon. It kept me on my toes and as I said earlier it is definately different to all the other war movies I have seen.

Score: 9.8
Product reviews for listing 2269: The Secret of Moonacre -  Directed by Gabor Csupo

When 13 year old Maria Merryweather's father dies, leaving her orphaned and homeless, she is forced to leave her luxurious London life to go and live with Sir Benjamin, an eccentric uncle she didn't know she had, at the mysterious Moonacre Manor.

Soon Maria finds herself in a crumbling moonlit world torn apart by the hatred of an ancient feud with the dark and sinister De Noir family. Maria discovers that she is the last Moon ... more...