ProdID: 1858 - Into the Wild
Directed by Sean Penn 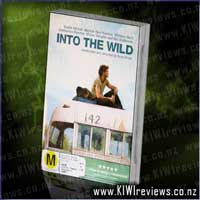 Into the Wild product reviews

Into the Wild is inspired by the true story of Christopher McCandless, a young man who abandons his life of comfort to pursue the freedom of life on the road, a quest that leads him to the Alaskan wilderness and the ultimate challenge of his life.

I have recently been laid up bedridden with a back injury again, so I got lumbered with a pile of movies to try and stave off the stir-crazies. This was one of them. This is one of those 'out of the blue' movies that you start off thinking "Why am I watching this again?" and end up thinking "How did I miss seeing this earlier!" Its one of those movies that by the end you are filled with a mixture of inspiration at the power of the soul to drive someone to explore their limits, and melancholy at how the destination makes the journey worthwhile but only for the one participant. Emile Hirsch plays Christopher McCandless who travels under the assumed name of Alexander Supertramp. The movie jumps around a lot, tracking from 'now' and giving flashbacks to explain how he reached this place or that.
I was impressed by the performance of 'Brian H. Dierker' who played the part of hippee 'Rainey'. At first I thought it was 'Ted Levine' who stars as Captain Leland Stottlemeyer in the great series 'Monk' with Tony Shaloub. Alas it wasnt him, mores the pity.
This movie is one of those ones that will pull you into it, keep you there through all the twists and turns and finally, exhausted, spit you out at the end having felt everything at full force.
All in all this is a movie everyone should see. For the young it shows you that you are wise to want to go and see the world outside your little enclave, it will make you grow as a person and show you new ways to see what is right in front of your face, but beware how far you go because you might not make it back intact. For the older set it will remind you that youth has the promise of anything it can imagine, tucked up inside it waiting for the right rain to sprout. For the rich it will show you that you live in shelter from the reality of the world as it stands and that for all your money and power you are blind to the truth of things, while for the poor it shows you that though your life is hard you live in the face of it, have the strength to endure and that true living doesnt require any more money that it takes to reach the next stop on the road. To call this movie 'Inspirational' doesnt really do it full justice.

"Planes: Fire & Rescue" is a new comedy-adventure about second chances, featuring a dynamic crew of elite firefighting aircraft devoted to protecting historic Piston Peak National Park from raging wildfire. When world famous air racer Dusty (voice of Dane Cook) learns that his engine is damaged and he may never race again, he must shift gears and is launched into the world of aerial firefighting.