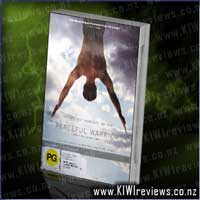 Disclosure StatementFULL DISCLOSURE: A number of units of this product have, at some time, been supplied to KIWIreviews by the company for the purposes of unbiased, independent reviews. No fee was accepted by KIWIreviews or the reviewers themselves - these are genuine, unpaid consumer reviews.
Available:
March 2008

Adapted from the international best-seller by elite gymnast Dan Millman, Peaceful Warrior brings together the world of competitive sport and deep spiritual philosophy to tell a unique, inspirational story of human awakening and transformation.

Dan Millman is a typical college jock: a good-looking, cocky gymnast and Olympic hopeful whose risk-taking garners him countless trophies and plenty of attention from women. Suffering from insomnia brought on by a relentless sequence of nightmares and visions, Dan goes for a late night jog and chances upon a brightly lit service station. There he meets an old man behind the counter with an uncanny ability to cover impossible distances in the blink of an eye - one minute behind the counter, the next on the service station roof.

Awed by the implausibility of his movement in space and time Dan wants to know the secret and implores him for guidance. The old man, who he comes to know as Socrates, obliges, imparts his wisdom and initiates him into a new life and world view. Dan embraces this knowledge - to a point. But when his dreams of greatness are all but shattered in a motorcycle accident and he is told he will never compete again, his faith in his own ability is put to the test.

Dan must challenge the very core of his belief system if he is to overcome this physically and emotionally debilitating turn of events.

Ironically this movie had some real appeal for me. After being laid up in hospital after getting hit by a car while on my pushbike and being told I am lucky my spine stayed intact I have the joy of a few months of rehab to look forward to. Because of that I found the movie quite worth watching, and I am really glad I did. It has given me hope that I might be able to walk normally and get back to my cycling and put these last 8 weeks behind me. The movie itself it pretty strange, with the 'Socrates' character doing some pretty trippy stuff, and no real evidence he existed at all by the end of it. Certainly the only other character in the movie to interact with him, Joy, doesn't mention him much and we don't see her after Dan's big show, just the closing credits. If this movie is in some way supposed to be accurate, I am not sure what to make of it, because it reminds me far more of a story played out in line with the concepts behind the What the Bleep?! movie(s). I loved the way Dan fought for what he loved and valued, and it carried many good messages, for those willing to watch with an open mind and apply a bit of thought. I found this far more enjoyable and easy to get involved in than the 'Bleep?!' movie(s) and I think anyone who thinks they have a handle on life should watch it, just to wake them up a bit. "There is never nothing going on. There are no ordinary moments." It's a great thing to keep running in your head on loop play. Live for your life, but focus on the moment.

Gothic Fantasy which pits living and breathing actors Jennifer Connelly and David Bowie against a motley collection of Muppet monsters. The film centers upon teenage Sarah (Connelly) who lives in a fantsy world of myth and magic, evil spells and wondrous enchantment.

She is babysitting her little brother when she cavalierly wishes that goblins would take him away. She gets her wish and a coterie of goblins adduct him. She then ... more...