ProdID: 1751 - The Brave One
Directed by Neil Jordan 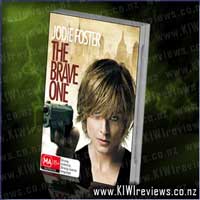 The Brave One product reviews

Neil Jordan's 'The Brave One' stars Jodie Foster as a happy woman whose life changes irrevocably after a brutal assault leaves her partner dead.

The woman, feeling that the police investigation will be unable to catch the perpetrators, begins to live in constant fear. This outlook results in the woman eventually dispatching vigilante justice. Terrence Howard co-stars as the officer in charge of the investigation.

Its a hard time being locked up in a hospital bed for weeks on end but then again it has its highlights, like being able to lie back and watch some pretty cool movies without being hassled. This was one of those cool movies. At first glance you might think it was just another vigilant movie where the victim gets angry and goes on a killing spree, but there is far more depth to this one. First off the main character is female (well, d'UH!) and she isnt angry, shes mad. Mad in the sense that she is no longer the person she used to be before the traumatic experience that takes her entire life and stuffs it through a blender. After being attacked she buys an unlicensed gun for self-defence, but soon finds that New York really is a dangerous place to be, and soon has to kill to survive. After this, she loses the last thread of contact with her former self and becomes obsessed with dealing out justice wherever she sees freedom being abused. As the story progresses she is befriended by someone who could help her find some peace, if only he wasn't the biggest threat to her freedom. A stunning rendition by Jodie Foster, who has progressed from roles that have her as the used, the manipulated, the victim, and has taken her full-circuit to being the one in charge, the dominant, the brave one. The way she totally embraced the role shows itself clearly, and allows you to get immersed in the story without much effort. Well worth watching, even if you *do* have a choice.

During a fierce thunderstorm in rural Kentucky, a young zebra is accidentally left behind by a travelling circus. He is found by a former champion horse trainer, Noal Walsh and 'Stripes' is quickly adopted as a favourite pet by his daughter, Channing. Now 'Stripes' may not look like the other horses galloping across the fields, but he thinks he is no different and longs to race with all the thoroughbreds. So does Channing and, with some ... more...