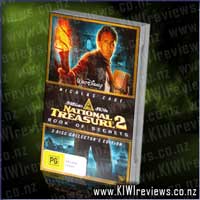 When a missing page from the diary of John Wilkes Booth surfaces, Ben's great-great grandfather is suddenly implicated as a key conspirator in Abraham Lincoln's death. Determined to prove his ancestor's innocence, Ben follows an international chain of clues that takes him on a chase from Paris to London and ultimately back to America.

This journey leads Ben and his crew not only to surprising revelations - but to the trail of the world's most treasured secrets.

I love a good treasure hunt (even if there are gaping holes in the plot) and having seen the first one, this was a must see. Ben Gates is at it again, searching for a lost treasure after his great-grandfather is accused of aiding in Lincoln's death. Determined to clear his families name, Gates heads off around the globe, ending up in America (of course) to find out the truth (if he can).

With a few moments of disbelief, as if the president would go off on his own, with a stranger, where he could be killed and other such plot issues, this was otherwise a fun movie and a good sequel to the first film. If you've seen number one then you need to watch number two. I hold out hope that there will be a third, it's been five years, but you never know with the movie world.

More than 3 years since the first movie rolled out onto our big screens, and finally Ben Gates is at it again... This time it's personal...

The story has a lot of action and appeal, and I thought was another (rare) example of how a sequel CAN be better than it's predecessor(s)... even though the story was so full of factual holes it could have been used as a crayfish trap, it was very well done and I loved watching it... so much so that I actually paid to see it at the movies TWICE in one day, and STILL watched it on DVD... twice!

I was impressed at how they took the story all over the globe, but all places linked by a common thread... and despite a few totally unbelievable bits (what kind of President is going to crawl into a hidden tunnel with someone he's only just met?! I mean, really...) the movie held itself together pretty well... if you accept the distorted historical view they offered for obvious reasons.

Overall, an excellent movie, well worth seeing, and personally very glad it has finally come out on DVD. It will hold a place of respect next to it's predecessor on my shelf. I am also dying to find out what was on page 47 of The Presidents' Book... so I am hoping that is the seed for a third movie... -fingers crossed-

When a funny band of furry friends escape from the city zoo, they discover that New York City is the biggest, craziest jungle of all. Bursting with special features, including a hysterical bloopers and blunders reel, deleted scenes and more, The Wild is ferocious fun for audiences of all ... more...