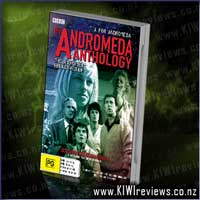 A for Andromeda anthology product reviews

A for Andromeda and its sequel The Andromeda Breakthrough were the sci-fi sensations of the 1960s. Their influence can still be seen today in films as dissimilar as Contact and Species.

A For Andromeda - The year is 1970. A team of scientists decode a mysterious transmission from the Andromeda galaxy and discover that it provides instructions to build a computer more powerful than ever conceived of on earth. When constructed, the computer issues biological information to create new life - resulting in a girl called Andromeda. But who is this creature? And what has she been created to do?

The Andromeda Breakthrough - Andromeda finds herself in captivity, snatched by a global conglomerate backing an unstable Middle Eastern country, as violent weather ravages the Earth. Is it too late to discover the real force and meaning of the messages from a far off world?

Of the original, long-lost A for Andromeda, one complete episode (ep 6) has been recovered, and includes a commentary with actor Peter Halliday and Producer Michael Hayes. All existing footage from the other episodes is included on this three disc set, plus a fill run of telesnap images to fill in the gaps with accompanying text narrative. PDFs of the scripts for A for Andromeda are also included along with items from Radio Times magazine, and an extensive photo-gallery with music, a documentary reuniting the original cast and crew, and the entire 6 episodes of The Andromeda Breakthrough. Also included is a 32 page Collector's booklet and a digitally restored episode 'The Face of the Tiger', which has never been seen since its original broadcast.

Now, I am well known in my circle of friends as a die-hard sci-fi fan, dedicated to the pursuit of even the oldest classics in one form or another. However, I admit that I had never heard of this show!

After doing some research, I was surprised by what I found out about this. Sounding more like an early version of "Species", or the TV series "Threshold", this looked more like some early series of Dr Who! It also had some echos of a book called "The Hercules Text" by Jack McDevitt... this explores the idea of messages deep space that reveal advanced technology, and what happens when we dive in and try to use it without understanding it first.

It was really disappointing to learn that most of the series had been lost, and that only a series of still-frame snapshots and a few short clips had survived. This also made it really difficult for me to watch, because I often set a movie or series going in the background while I work, so that my first 'viewing' of it is more a subliminal soaking-in, so that when I watch it the second time, I am able to pay attention to the not-so-obvious stuff. You know how it goes, when every time to see a movie or show, you pick up something that slipped past you previously...

With this, I had to keep my attention focussed on the screen constantly, and because of the chop-n-change between snapshots, and the occasional film clip, the shows had little in the way of smooth flow for me. Quite a disappointment, because I really think I would have adored the series otherwise.

Overall... not at all sure why this was made, and have mixed feelings about it. The story had a lot of potential, and the surviving episodes really did impress me, as well as highlighting the lamentable loss of the rest. Perhaps some things are best left to moulder in the archives... I leave it to you to decide for yourself if this should have been one of them. Perhaps, despite the attempts of the 'Species' chain of movies to latch on to this concept, the scripts could be used to re-make the series with modern actors and technology. I think we could ressurect it quite successfully.

Hinterland provides premier Paintball and activity experiences right here in Hamilton. Stalk your opponents amongst ferns, a creek and a gully in the bush fields then it's survival of the quickest in the fast and furious world of the speedball field. Paintball Hamilton gives you the full adrenalin-pumping, heart racing experience in a safe and professional environment and only approx 15 minutes north of central Hamilton. ... more...