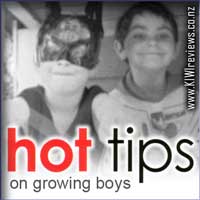 Disclosure StatementFULL DISCLOSURE: A number of units of this product have, at some time, been supplied to KIWIreviews by the company for the purposes of unbiased, independent reviews. No fee was accepted by KIWIreviews or the reviewers themselves - these are genuine, unpaid consumer reviews.
Available:
see website

It's easier to build boys than fix men and that's the challenge for parents as they influence the men of tomorrow.

A 3 hour guide for parents on how to raise your sons to be good men.

Children's Map of the World
Rating: 9.3

As the father of a outgoing and energetic, independant little man, I was curious to see what this seminar could hold for me. After reading his latest book on parenting of boys I was expecting a lot from this, especially as I had spoken to the promoters and was to be granted (no pun intended) an personal chat with The Big Man himself during the half-way break.

Well, even though I arrived a little late, I found I hadn't missed much except all the introductory speeches by the local team. By the time I found my seats, it was all ready to go. I was impressed and entertained by the way Ian started the seminar off by issing Crunchie Bars to the 'winners' of various little contests, such as "Which man here is quietly proud of what he cooked for dinner tonight?" and "Who's travelled the furthest specifically to be here tonight" (The winner was the chap sitting next to me, who had travelled from New Plymouth to Palmerston North!).

This really set a good tone for the start, which Ian played on well, keeping us all interested and absorbing the pearls of wisdom he imparted with an equal dose of humour and serious intent. It seemed like half an hour later when he called 'half time' and we realised we had stayed glue to our seats, flicking through the "Seminar Manual" (available at entry for around $10) for well over thriple that amount of time. Stunning stuff really, and so much was covered!

As well as giving anecdotal evidence of the tactics in action, Ian was also showing us that it doesn't take a lecture to impart knowledge... all it takes is first capturing their attention, then throwing funny into the mix and they'll swallow it right down, rather than standing toe-to-toe and lecturing young boys, and trying to cram it down their throats. For those of us who are proud fathers of strong-minded boys, this is a vital strategy to operate on. Failure to get this hint could easily destroy any chances of having a loving bond with our lads as they grow through the more rebellious years to come.

On top of all this, Ian and Mary, who presented a small section just after the intermission, covered other available resources, such as books by other parenting experts, audio CDs to play in the car for those who just don't have the luxury of time to sit and read, as well as other factors that can affect how the little boys will grow into strong men, such as how relationship issues can spill over into the lads' lives and affect their mental impressions of how men and women should interact, the ways modern marriage-substitutes can alter the perception of family love and how certain adjustments may be required when a young boy is being raised in same-sex unions, and other such important, and often overlooked, information. Much of which is contained, in serialised parts, in the "Parenting" magazine put out by Parents Inc.

Overall, I was totally stunned, and after chatting with Ian and Mary during the mid-break, I was even more impressed at how well they have done, raising a whole clan of strong and healthy children, grand-children, and if I recall correctly, now a crop of great-grandchildren. There is a lot that can be learned at these seminars even by parents who think they know enough... you can NEVER know enough... 'enough' is not enough at all... and there are companion seminars for parent of girls as well, so if you have kids, or have one on the way, or even want to have kids, you should be checking out their website for the next seminar in or near your area, and get yourself to it... you won't regret it, and if you apply the tactics learned, your kids, and their kids, will be thanking you for years to come... once they understand what you did and why you did it. Tough love isn't easy love, but it's TRUE love.

Now available in New Zealand from Mahobe, these unique children's maps include hundreds of historical, educational illustrations and points of interest, created by award-winning artists.

Each map is drawn by a different artist, utilizing their unique style so that each looks different in some way. The maps include hundreds of illustrations of animals, landmarks, and characteristics specific to the city or country. The Solar System map ... more...