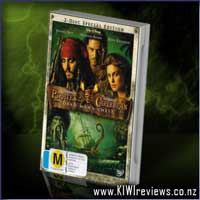 It turns out Jack owes a blood debt to the legendary Davy Jones (Bill Nighy), ruler of the ocean depths and captain of the ghostly Flying Dutchman. If Jack can't figure a crafty way out of this one he'll be cursed to an afterlife of eternal servitude and damnation. And as if that weren't enough, Captain Jack's problems throw a huge wrench into the wedding plans of the blissful Will Turner (Orlando Bloom) and Elizabeth Swann (Keira Knightley), who quickly find themselves thrust into Jack's misadventures!

Well, each wants the chest for hisself, don't 'e? Mr. Norrington, I think, is trying to regain a bit of honor. Old Jack's looking to trade it, save his own skin. And Turner there, I think 'e's trying to settle some unresolved business twixt him and his twice-cursed pirate father." I think that this quote sums up the movie pretty well and could have been used in the blurb on the back of the case. Once again you can expect a fair few laughs from Captain Jack Sparrow throughout the movie and cements his place as my favorite character in the Pirates of the Caribbean films.

There are a couple of moments that had me rather dizzy, the fight scene with Captain Jack Sparrow and Norrington, wowzahs it had me dizzy and it is still hard to watch after a few viewings (and the LEGO game is just as dizzying, except it doesn't end till you get it right.

) The special effects on this film are really good, Bill Nighy is fantastic as Davy Jones and this is one of his roles that really had me liking the actor and wanting more. There are little things from the first movie that get answered in this movie but you have to keep watching till the end of the next to get the full answers.

Full of adventure, action, and typical Jack Sparrow humour, this movie was a great sequel to The Curse Of The Black Pearl, and even after watching it 4 times already, it still hasn't lost any of its fascinating charm. Since I'd seen the first "Pirates of the Caribbean" movie and absolutely loved it, "Dead Man's Chest" was, for me, a must see- and I most definitely was NOT disappointed!!
The big sword-fighting scene, which has Will Turner, Jack Sparrow, and Captain Norrington all running like mice on a HUGE wheel - dancing and diving all over it, is extremely entertaining and very well done, as are the special effects that turn Bill Nighy into "Davy Jones", which are shown in great detail in the Special Features on the second disc- definitely worth watching, along with most of the other sections on the Special Features disc!!
I am now thoroughly looking forward to the third movie, and know that Dead Man's Chest will be a regular visitor to the DVD player!