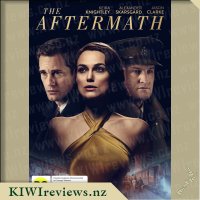 Set in 1946, this engrossing drama follows Rachael Morgan (Keira Knightley), a British woman whose colonel husband (Jason Clarke} is charged with rebuilding war-ravaged Hamburg. When she joins him there during the bitter winter months, she learns that they will be sharing their home with a German widower {Alexander Skarsgard} and his troubled daughter. Before long, the unusual arrangement intensifies political divides and stirs deep personal wounds. In this increasingly charged environment, enmity and grief give way to unexpected passion and betrayal.

I had been looking forward to seeing The Aftermath: the historical period interests me, so I thought it would fill in a few details. There are so many film interpretations of the war years, but few that examine the post-war period when things were still tough for people throughout Europe. Basic items were still scarce, housing was variable depending on how much war damage there had been, and bridges had to be rebuilt between nations that had been enemies for so long despite their geographical closeness. And the cast was another drawcard: Keira Knightley, Alexander Skarsgard and Jason Clarke are all actors who have offered some excellent performances in their respective film careers.

The opening of the film hooked me in immediately. It started with a Dr Zhivago-reminiscent shot of a steam train making its way across a picturesque, snow-bound landscape - possibly bound for Hogwarts? Then, the combination of archive footage, set construction, and CGI proceeded to offer a compelling glimpse of post-war Hamburg. It reminded me of a montage of the Twin Towers footage once the 9/11 dust had settled, the CGI introduction to the Game of Thrones series, and the fine lattice walls of some of the most iconic Moorish buildings of Granada: a skeleton of a city, both beautiful and terrifying, but utterly compelling. And below the ruined walls, the images of people scrabbling among the rubble for who knows what. I was geared up for a treat.

Unfortunately, the rest of the movie did not live up to its stunning opening. Certainly, there were moments where the cinematography took me by surprise with its effectiveness, as when the cameras zoomed in yet again on a group of ruined buildings; the musical score only added to this. But interspersed with the genuinely fascinating set and soundtrack was the story of a doomed love affair. It was as though the director could not decide whether this was to be a romance set against a post-war background or a historical movie shot against a human element. I found myself getting quite annoyed as the love affair played out. Rachel Morgan (Keira Knightley) and Stephen Lubert (Alexander Skarsgard) both came across as selfish and entitled - for different reasons, but with the same outcome. The two actors did their best with the roles they had been given, but the whole "love affair" was so predictable it had me yawning!

There is one moment in the film that does have genuine magic. That is when Lubert's daughter Freda (Flora Thiemann) and Rachel use their common love of music to communicate in place of words. Debussy's Clair de Lune, a piano piece familiar to most musicians, is a deliberate choice: the composer, being French, does not belong to either the Germans or the English, so is a common ground to bring the two together. The relationship between Rachel and Freda is much more plausible that than between Rachel and the two men in her life. Both Rachel and Freda have suffered an immense loss in very similar circumstances, which opens the way for them to discover that they have more in common that they had realised. Of all the performances in this movie, I found Thiemann's to be the most authentic - possibly because she is a talented actor, or maybe because she was given a part worthy of her abilities. She plays the sulky, wounded teenager so capably that it is hard to fault her presentation.

I think one of the issues with this movie was that it attempted to do too much. Many of the characters were so underdeveloped that they were just part of the backdrop. Freda's involvement with Albert (Jannik Schumann) is glossed over, thereby bypassing the opportunity to expand on the disempowerment and resentment of the young people who had lived through the war. So many possibilities were not explored; in fact, I think this movie might have been better expanded into a mini-series so that the various character motivations could be further explored. As things were, I was often confused as to just who was who!

Even the conclusion was predictable. There were only two possible endings given the build-up to the fate of the four main protagonists. Each was as hackneyed as the other, so in the end it did not matter! I kept hoping something dramatic might intervene - some deus ex machina to overturn everything and change the outcome completely. But no, it plodded on to its inevitable end. So sad, because the movie had such potential, and its messages of reconciliation and renewal are as relevant today as they were in 1946.

Dating back to the time of Jesus Christ, an ancient relic known as the Loculus has been fought over by the forces of light and darkness down the centuries. Created in 50 AD, the wood panels of the Loculus are emblazoned with two images: the Ankh symbol - a looped crucifix - and the Caduceus - a rod entwined with two serpents.

On its perilous journey through history, the Loculus was further adorned with more arcane mystical imagery ... more...