Things In The Sea Are Touching Me! review 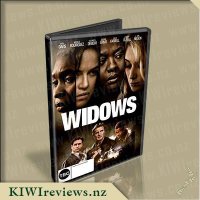 My mother in law was staying over and the men had gone out so I thought this would be the perfect movie to watch together as nothing quite beats a female heist movie! The first disconcerting thing we noticed was the volume of the movie and we were constantly increasing the volume for the talking scenes and then turning down the action sequences so we didn't wake the neighbourhood.

With an all star cast I was expecting a lot from Widows which is the story of four women with nothing in common except a debt left behind by their dead husband's criminal activities. Set in Chicago, tensions build when Veronica (Viola Davis), Alice (Elizabeth Debicki), Linda (Michelle Rodriguez) and Belle (Cynthia Erivo) take their fate into their own hands, planning a heist to repay the debt.

I think my sights were definitely set too high. Widows tried to cover too many topics; gender, economics, politics, racism, police corruption, prostitution, gun culture, materialism to name a few, and I ended up wondering whether I was watching a female heist movie, a political film or a gangster movie. It's a shame the core issues were not focused on more thoroughly and the widows characters developed, as I had no empathy towards them. The movie would have benefited from spending more time on their lives with their husbands and the planning and execution of the heist. As it was, some parts were laughable and completely unrealistic.

Tacky and unimaginative flash backs were also used to fill in gaps which felt like an afterthought and the film left me with unanswered questions which was frustrating. Unfortunately, I found Widows predictable and underwhelming and my mother-in-law felt exactly the same way. Some may enjoy this 'female empowered' film but I have to conclude that this is one of those 'the book is much better' movies.

From the makers of The Intouchables. Based on a true story. For twenty years, Bruno and Malik have lived in a different world - the world of autistic children and teens.

In charge of two separate nonprofit organizations (The Hatch & The Shelter), they train young people from underprivileged areas to be caregivers for extreme cases that have been refused by all other institutions. It's an exceptional partnership, outside of traditional settings, for some quite extraordinary characters.