ProdID: 7983 - Sicario: Day of the Soldado
Directed by Stefano Sollima 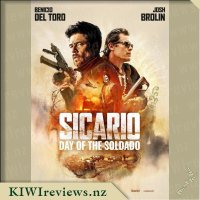 Disclosure StatementFULL DISCLOSURE: A number of units of this product have, at some time, been supplied to KIWIreviews by the company for the purposes of unbiased, independent reviews. No fee was accepted by KIWIreviews or the reviewers themselves - these are genuine, unpaid consumer reviews.
Available:
in cinemas 28 June 2018

This sequel came out of nowhere. I wasn't expecting it, and speaking to people afterwards, there were not many people that were. So marketing of the film really has let it down so far in that respect.

The original Sicario film was a surprise winner, providing a great film with a suitable mix of gore & violence, conflicting ethical standpoints, and enough grey areas to actually make you question where you stand on certain issues. Was a sequel necessary? And would it work as well as it's predecessor?

Day of the Soldado is noticeably missing one key aspect right from the get-go; Emily Blunt. Blunt's Agent Macer provided a grounding force in the original film. That innocence and righteousness that we all idealise. Doing everything we can to protect everyone. It's a contrasting opinion to Josh Brolin's character Matt Graver, who has no qualms in doing whatever it takes to ensure the security of his country, even if it is at the expense of human rights and other lives. That balance between human rights & freedom, and security was the factor that really added the tension to the film. Benicio Del Toro role as Alejandro Gillick was also great as the unknown elements to his motivation added the extra intrigue and uncertainty.

And that is what is missing from Day of the Soldado. Without Blunt, there is no grounding force. Instead we have this weird buddy cop (agent?) film, which has no sense of mystery or tension, changing the films genre from a crime thriller, into just a run of the mill action flick. The relationship between Graver and Gillick is given much more impetus than it deserves and is used to try and bring some sort of tension between the characters as the plot unravels, but there really is no contention. The film starts out with a slick black ops team that are several steps ahead of everyone, and practically invincible, and then the plot unravels, and the film rushes to the end of it's runtime. There is no real character development from either of the big players, and it feels like it was rushed and the big twists and reveals were changed to try and force in a third movie in the franchise (which is heavily alluded to).

It is a timely film when you think about it, with the recent news coming out of the US about detaining immigrants and separating kids from their parents. That being said, again without Blunt's character (or a character with a similar moral compass) being present, the film loses it's balanced direction and instead becomes heavily biased against immigrants. Losing the whole sympathetic angle, we watch the grooming of Mexican terrorists from both in and out of the US. When illegal immigrants are having their human rights stripped of them in real life (they may not be legal citizens, but they are still humans) it's quite a shame to see the fear-mongering pushed towards not being able to trust legal migrants and children born in the country. It's something that isn't particularly helpful. The issue is heightened by the fact that the president is referred to as nothing but the POTUS; no face shown, no name is mentioned.

But how was the film when you don't compare it to the original film, and avoid looking at the political aspects? It was a typical over-the-top action film. Including so much unnecessary violence that the audience really loses that sense of pain and sadness that should come with human life. The lives are taken without thought, that it lowers the value of the human life to the point that nobody cares. You do get to watch some brilliant espionage tactics, psychological warfare, black ops missions, and a whole lot of convoy attacks, which are always fun to watch.

Sicario: Day Of The Soldado has been turned into a popcorn flick. Switch off the brain, and watch cars explode, Mexican children being turned into gangsters, dangerous immigrants getting shot, helicopters chase down cars, subtlely have your views on immigrants altered without any form of opposing view. Exciting to watch, and a reasonable standalone film, but it doesn't hold a candle to the original.

Score: 9.3
Product reviews for listing 5625: Out of the Furnace
Directed by Scott Cooper

From Scott Cooper, the critically acclaimed writer and director of Crazy Heart, comes a gripping and powerful drama about family, fate, circumstances and justice. Russell Baze (Oscar Winner Christian Bale) leads a dead end life - he works a meaningless steel mill job all day, and care for his terminally ill father at night.

When Russell's brother Rodney (Casey Affleck) returns home from Iraq, he is lured into one of the ... more...